Artur Vanyan, known as a leader of the armed group neutralized in Nork-Marash, one of the district of Yerevan in 2015, was released on 1 mln drams (about US$2100). According to NSS, he is the main defendant in the case and his 20-member armed group planned to seize power in the country.

Vardanyan was jailed for 4 years, yet he was not agree with the charge. According to his lawyer, while being imprisoned, Vardanyan’s health problems got worse. Only Vardanyan out of about 20 defendants in this case was in custody. The others were released after the Velvet Revolution in spring or were in freedom on a signature bond.

On September 12, Yerevan Court of General Jurisdiction resumed the trial of RA Second President Robert Kocharyan and other former high-ranking officials. Kocharyan’s supporters and opponents gathered in front of the court throughout the whole hearing. RA Second President is charged for overthrowing the constitutional order and taking US$ 3 mln bribe.

Lyova Sargsyan has been announced wanted in another case since 2018 on the fact of illegal enrichment and concealment of property subject. 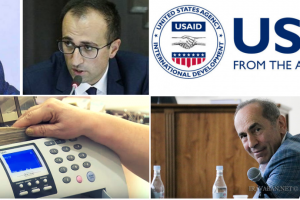