RA Government pays great attention to funding of higher education targeted at lowering interest rates of student loans. According to the Government decision on March, 2019, the annual rate of student loans  was decreased to 9% instead of previous 12%.

The state will subsidize 2% of the loan, and 3% for more advanced students. The maximum loan amount per student is 2.8 mln AMD, and the maximum four-time share makes 700.000 AMD. 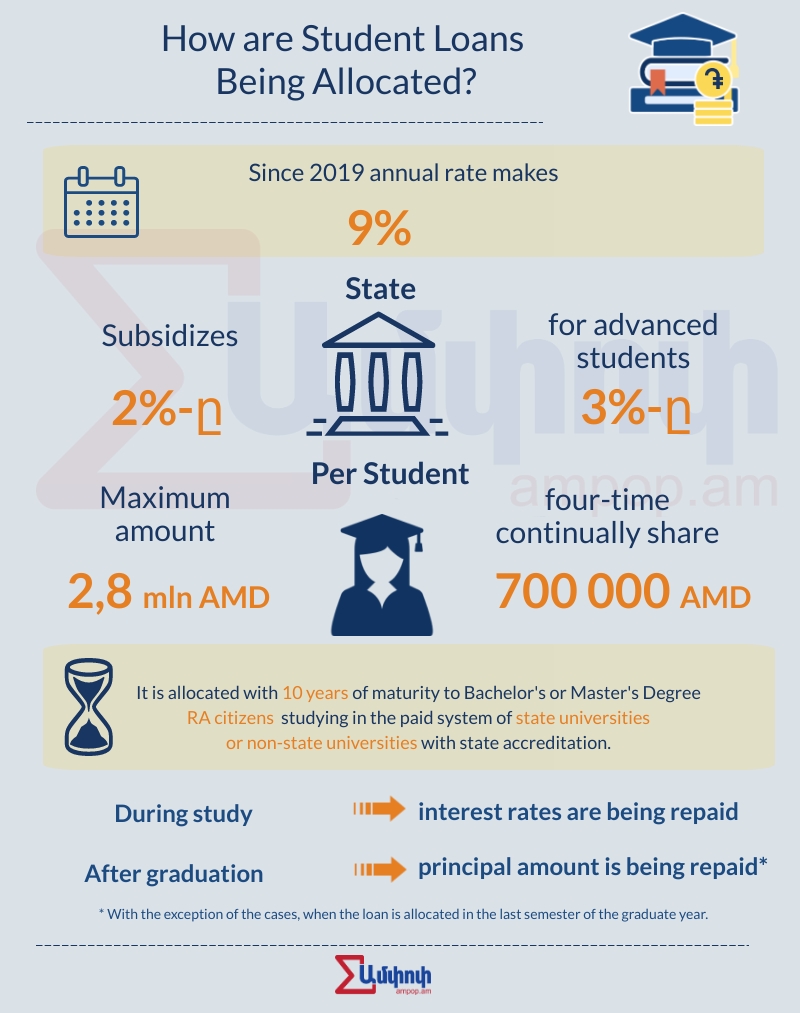 In accordance with those amendments, the NA is developing a draft law by which the tuition fee may be compensated by Income tax. The bill was initiated by “My step” faction MPs Lilit Makunts and Sisak Gabrielyan. At the joint press conference they noted that at the initial stage the program will refer to Master’s Degree students.

The grounding is that only 1% or 2% of 90.000 Bachelor students work. There is no statistics on how many of them are registered and what their salary makes. By testing it in the Master’s Degree, the MPs will present preliminary calculations to the Government on the effectiveness of the program. An approximate scale may come out on tax revenues and shadow reductions provided by the program.

The bill is in the center of serious debates. Negative comments on the loans mainly put stress to the reality that amendments to the loans do not solve the qualitative issues of education, basically.

The availability of student loans, regardless of students’ progress, does not serve as a basis for finding job more easily.  And newly graduates adapt with labor market with difficulty, whereas the principal repayment of the loan starts from the graduation year.

The student loan system was introduced by the state in 2013 to alleviate the burden of tuition fees for students enrolled in a paid system. At the same time, the relevant document states that it aims at making higher education system more attractive for the youth and contributing students’ self-interest in their own way.

Let’s try to have a look at the students’ paying obligations with digital-counting version. Student of “X” University with 600.000 AMD annual tuition fee may serve as an example. During the given semester, the student made use of 300.000 AMD turition fee with 12.69 annual interest rate (9.4 with new version) with 4.5 year maturity.

This was just an example for 300.000 AMD required for one semester. It is especially difficult for those students who apply for a credit program during their graduate course, as repayments include both the principal amount and the interest rate in June (taking into account the fact that the student has finished the thesis defense). E.g, if the student has made use of 900.000 AMD of credit funds,out of which 300.000 AMD is in the last semester, then after graduation his monthly commintments make 25.000- 30.000 AMD. 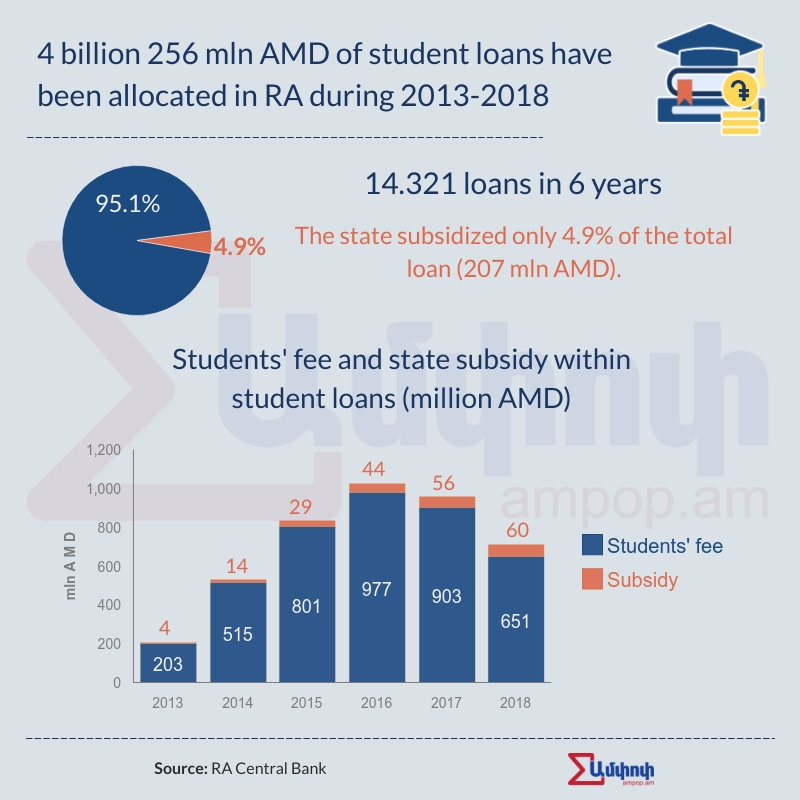 Both the inforgraphic and the calculations make it vivid that the state subsidizes interests, but with a small fraction. It turns out that financial burden of the state is not great, whereas the program provides funding for universities, activation of credit programs of banks and other financial institutions.

When comparing it with another financial tool of the Government, which is free tuition financing, it becomes obvious that either during study or after graduation, the student has no commitments before the state. What is more, the state allocates 5000 AMD scholarship to students studying for free as  stimulation. The scholarships for those with excellent study increase by 1000 AMD.

Students of socially vulnerable families receive 50-100% compensation from the state depending on the degree of vulnerability of the family, which is defined by the Government decision. In this case, the Ministry of Education and Science sets the threshold of average qualitative assessment, in case of which students may make use of this benefit or scholarship program. The following version of the funding does not make any further commitments for the student, either.

Grant providing funds and individuals also lean on points, and students with average progress stay in shadow, while they also have the right to education.

So, a question arises: whether the investment made by the student in the form of a student loan provides the knowledge which meets the requirements of the employer and / or the labor market? Only in this case it is possible for the students to work with their profession having increasing and motivating salary and therefore fulfilling credit commitments.

According to Sargis Asatryants, education expert, there are good universities in Armenia, where the student may choose the right profession and take a student loan, and that step will be justified. However, the expert does not consider the student loan as justified in the general education system.

“Taking into account the overall picture, in my opinion student loans are not justified in the context that after graduation students will not be able to find jobs. Universities provide theoretical knowledge and to get some practical knowledge, students should spend extra money, hence, loan repayment will be hard for them,”says Asatryants.

The bill on the Income tax of working students is positively assessed by Asatryants, but with reservations: students stay apart from the essential educational process because of their jobs. However, Asatryants notes that working will be fully justified if it is addressed to the student’s professional development.

Article by Arpi Avetsiyan (Arpi is a borrower of student loan program since 2016). Calculations of the example noted in the article are made according to the formula mentioned in Arpi’s loan agreement.

Free School Feeding Program has Successfully Grown in Armenia
The Precious Girl: The Only Pupil of Geghakar School