According to the decree of RA Minister of Health Arsen Torosyan, head of National Center of Oncology named after Fanarjyan, RA chief oncologist Armen Tananyan was dismissed. He has been on this post since 2014.

The Minister noted that Tananyan was dismissed because he prevented foreign investors from visiting the center and there were complaints about the center. So his decision is lawful. At the same time Torosyan noted that some of the staff will be substituted for new and intelligent ones.

Tananyan himself has not commented on his resignation yet. He just left the center saying goodbye to the staff. While, one of his colleagues, Radiation Therapist Tatul Saghatelyan thinks no one has done so much work in the field of oncology for the past five years as Armen Tananyan.

Orthopedic oncologist Narek Manukyan has been appointed acting director of the center. He’s been working in the department of Bone Marrow Pathology since 2013.

USAID: US$ 4mln 785 thousand for Reforms

The US Agency for International Development (USAID) will allocate US$ 4 million 785 thousand to the reforms in the Government of Armenia. The Government agreed to make amendments in “More Competitive and Diversified Private Sector” cooperation agreement signed on September 28, 2013 to continue  implementation of the program.

So, the mentioned program will continue aimed at promoting more inclusive, efficient and accountable governance in Armenia. Besides, the program envisages to create favorable investment conditions, so it can stimulate economic growth in Armenia.

Assistance of 720 mln drams to victims of March 1 cases

To assist the victims of the events of March 1-2, 2008 in Yerevan, 720 million drams (more than US$ 1 .5mln) will be allocated from the Government’s reserve fund to the Ministry of Justice. 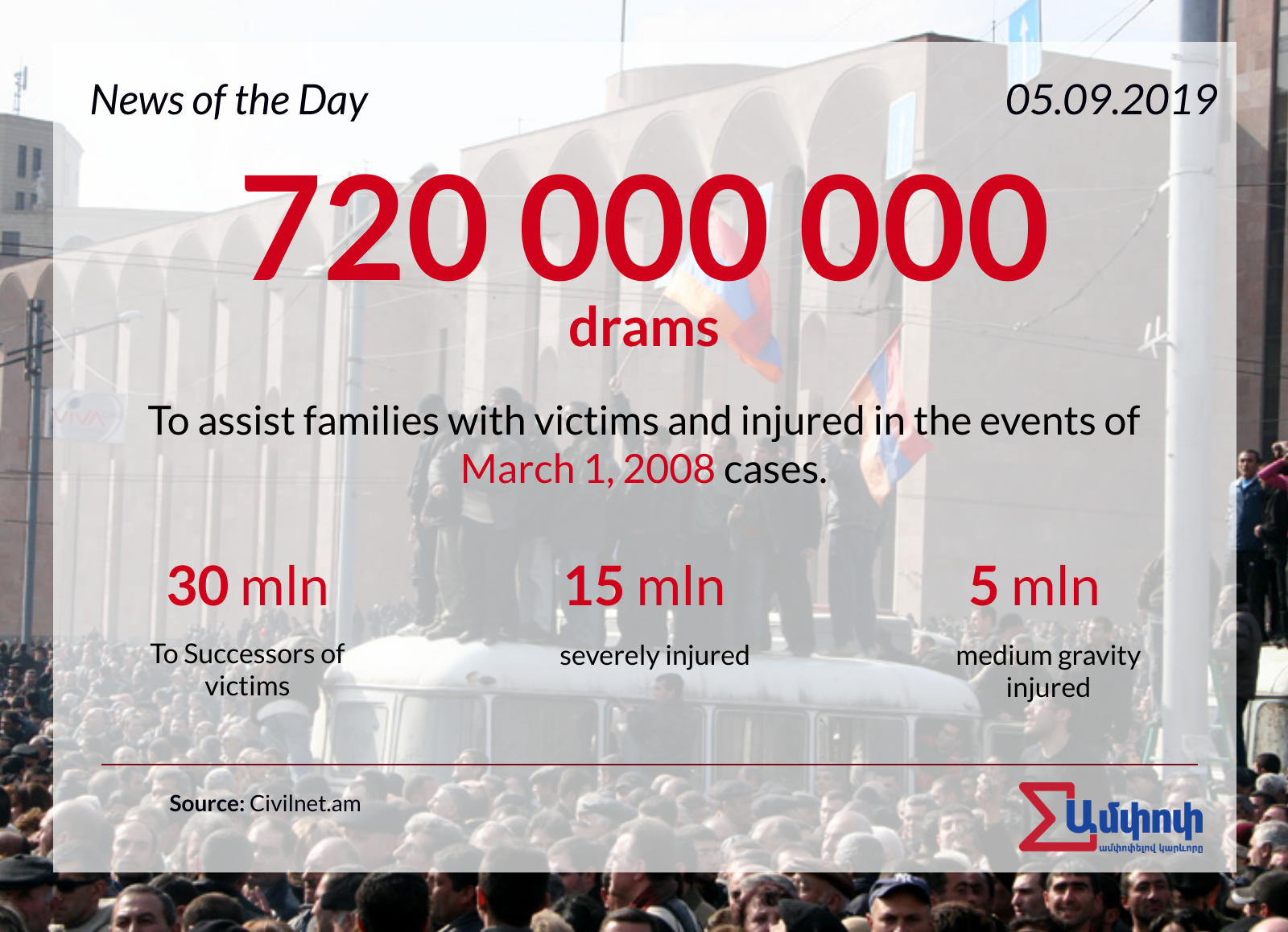 On September 3, in the Constitutional Court (CC) launched the trial on the basis of RA second President Robert Kocharyan’s appeal, in which the second President and his representative Aram Vardevanyan asked the High Court to declare two articles of the Criminal Procedure Code unconstitutional relating the preventive measure and prosecution.

On September 4, CC declared the decision on the basis of Kocharyan’s request. One of the disputing articles` Article 35 (preparation for crime) declared inappropriate and invalid, and the other` Article 135 (defamation in public speaking) not matching the Constitution.

Commenting on CC decision, Aram Vardevanyan noted that the lawyer team will discuss its actions after declaration of the complete decision. However, according to Vardevanyan, CC decision is mandatory for the judiciary, executive and legislative powers and non-compliance is legally prosecutable.

“Robert Kochayna should be released a day before the CC decision comes into power,” said Vardevanyan.

By September 4, the Ministry of Environment had to decide whether project of Amulsar gold mine needs extra EIA (Environmental Impact Assessment) or not.  On September 4, during the cabinet meeting, Minister of Environment Erik Grigoryan said basic data of some directions are not concrete. But exactly which data the word is about, is not mentioned.

Issues on making new EIA of Amulsar project were discussed, as well as they discussed legal aspects of the problem, the emergence of new environmental factors, etc.

The Prime Minister instructed departments and institutions to work in a coordinated manner to provide comprehensive analysis and complete data for the investigation.

According to the decision of the Government, 20 million 492 thousand drams (more than US$ 43.000) will be allocated to the National Security Service (NSS) on the purpose of protection of RA state border. 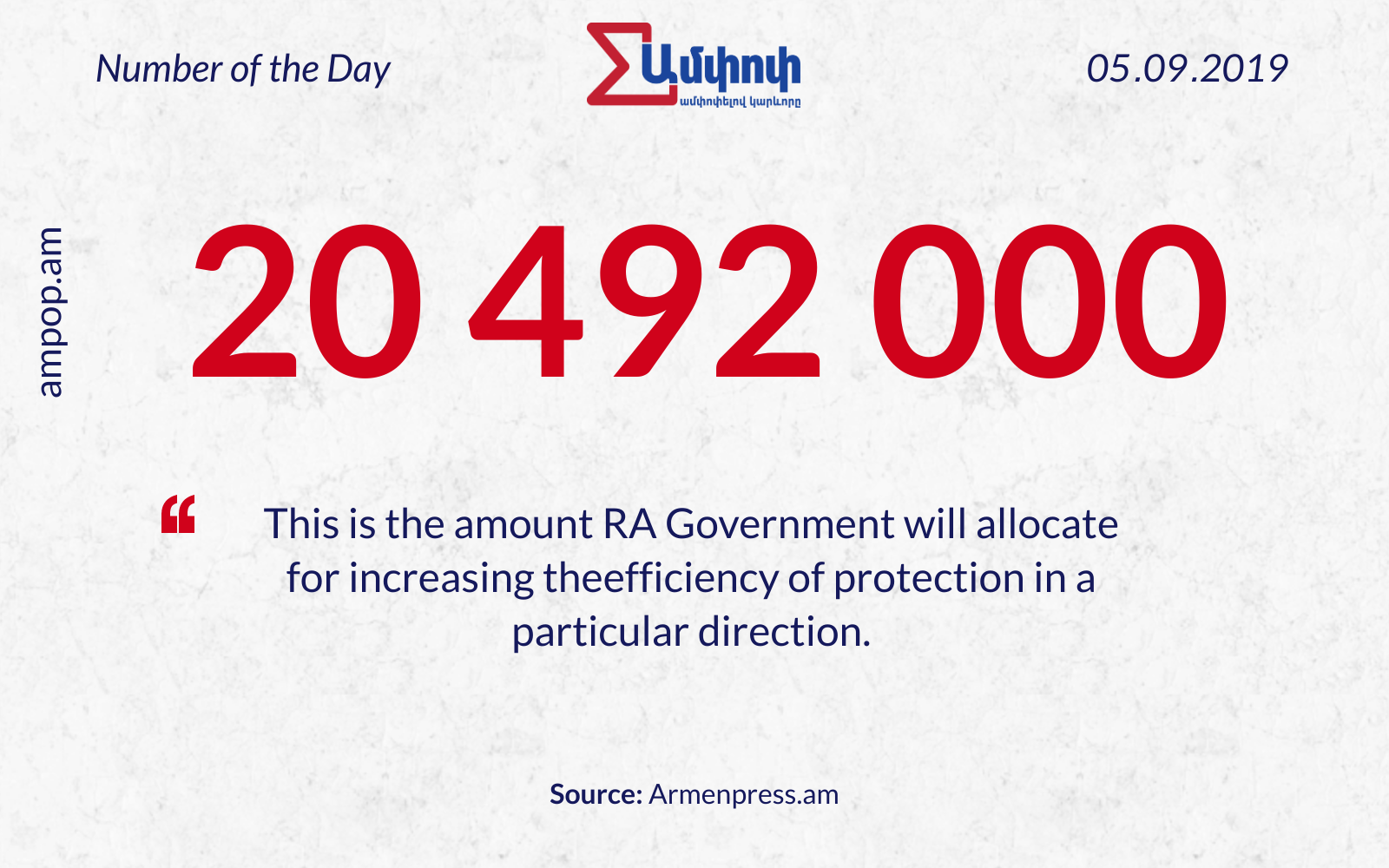