After the Velvet Revolution and change of government in Armenia in spring 2018, Armenia’s accumulative pension system also changed. On June 21, 2018, the parliament adopted the draft law “On Accumulative Pensions”. No amendments were proposed. From July 1, citizens in the system contribute 2.5% of their monthly income to their pension, and the state contributes 7.5%. Under the former government 5% was paid by citizens joining the system, and 5% was paid by the state.

According to Labor and Social Affairs Minister Mane Tandilyan, the new law is an interim measure. The Ministry will introduce a new draft law to the public, and for government discussion. If the new bill is approved by the autumn session of Parliament then new amendments will be in force from January 1, 2019. It is not yet known what the new draft law  will look like, but it is likely to regulate the “mandatory” component of  the system.

Since 2008, successive governments have supported the accumulative pension system because it aims to provide higher and sustained pensions, as well as direct relation between the incomes of today’s employees and their pensions tomorrow. Moreover, the system should contribute to the growth of the economy, as most of the accumulated funds are invested in the Armenian economy. This is important because in the recent years the investments in Armenia have been continuously decreasing and, in contrast, the public debt is growing. According to the government, the system is also aimed at promoting the formation and development of the financial market in Armenia, as this market in Armenia is almost non-existent.

The main problem is that for the years to come, Armenia will have unequal conditions for retirees because of differences in pensions which are caused by the issue of non-formal / unregistered workers, shadow and contractual wages, as well as traditionally high unemployment rates. Thousands of citizens, irrespective of their will, will not be involved in the accumulative pension system at all, or they will be involved only partially. As a result, they will receive a minimum pension at the retirement age, and those who have not worked at all will probably receive the government’s minimum benefit for elderly people from the government, which today does not cover the cost of the minimum weekly shopping.

But economist Ashot Khurshudyan says inequality is a central factor of pension system. According to him, each person is given the opportunity to decide how to live.

“There are people who prefer to work in the shade today, not to pay taxes, not to save money, and when retirement age, they will be complaining about why their pension is less than others’. Today we have to tell these people that it is their option. It is difficult, since a person who hardly earns a living will barely imagine that his savings will be returned him/her in the future by his/her decision. The solution is a small conflict between the employer and the employee. The employee should say, sorry employer, how would I participate in the pension system if you give me a shadow wage?” Khurshudyan believes.

“I think we have been late for the reform. We had to invest it 15 years ago as the years 2005-2006 was the most favorable period in Armenia regarding the ratio of so-called young-and-old. That is, if the system was introduced at that time, the demographic situation would have been much better,” said economist Ashot Khurshudyan, expert at the International Center for Human Development.

About The Pension System

Pension reforms in Armenia started in November 13, 2008 when the government adopted a reform program of pensions and a timetable for the implementation of pension reforms. Since 2010 the reforms have become the business of parliament. On December 22, 2010, the parliament adopted a package of laws ensuring the introduction of the pension system, which included laws on “Accumulative Pensions”, “State Pensions”, “Income Tax”, “Personalized Record Keeping of Income Tax And Mandatory Funded Contributions”, “Investment Funds”.

The voluntary component of the multi-level accumulative pension system was introduced in 2011, enabling anyone aged 16 or above to choose to join the system. However, citizens’ indifference towards the system meant that it was made mandatory for people to contribute in 2014. At that stage though a get-out was included in the law:  employees of private companies could submit an application not to join the system, and those who were already enrolled in it were given a chance to leave.

Since 2014, 5% (now 2.5%) of wages of state employees born in and after 1974 have been transferred to managed funds. The government undertook a commitment to make a 5% (now 7.5%) contribution to the pension fund for each employee/member of the system. But in 2015 private sector workers were then deprived of the opportunity to opt out the mandatory funded pension system. 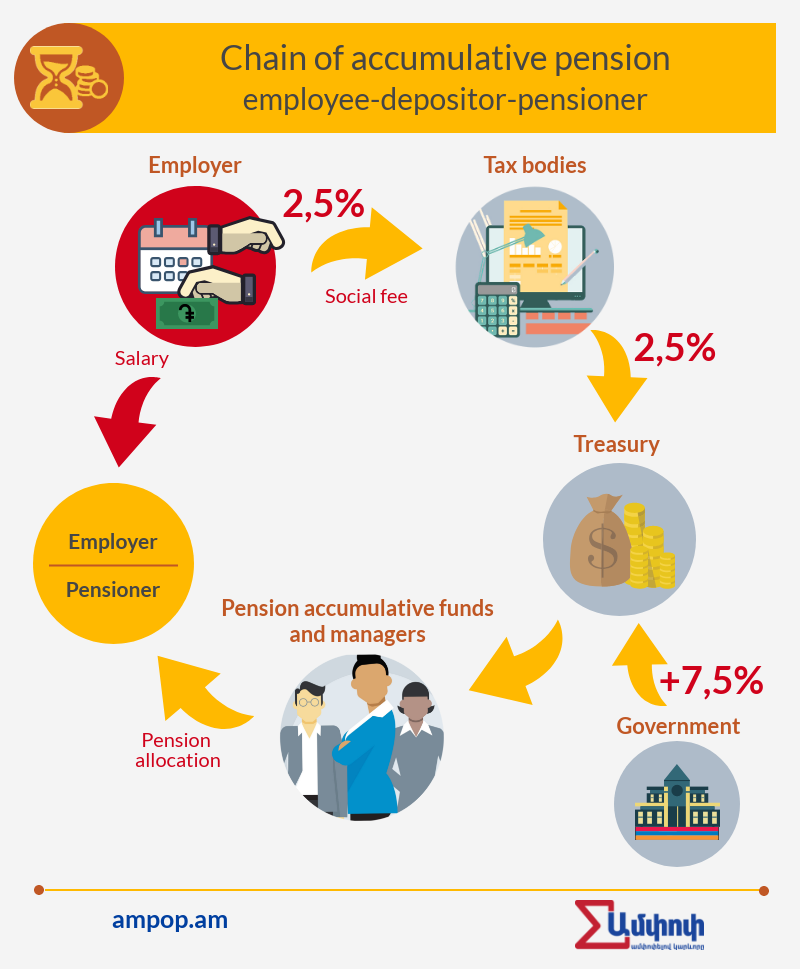 In addition to the accumulative pension system, the distributive pension system still functions in Armenia. In this case, the pension is formed according to the paid taxes of the employees only. And the size of the pension is determined not by the person’s contributions, but by the length of his/her service. As of the first half of 2017, pensions are distributed among 310,540 people. Starting from 2011, the retirement pension for a minimum of 10 years is 24,000 drams per month. Citizens who have never worked, get an old-age allowance of 16,000 drams per month.

In 2017, a member of the “Yelk” faction and parliamentarian Mane Tandilyan  —  now Labor and Social Affairs Minister, noted that the Law on Accumulative Pensions was not aligned with the RA Constitution. “This is certified by the two decisions of the Constitutional Court. Changes forced by the first decision were incompletely implemented in the law, and the second decision of CC was generally ignored. This means that some of the provisions of the law are unconstitutional not merely because of legal analyzes, but are a definite  anti-constitutional fact, as regards the CC second decision,” Tandilyan says. According to the decision of the Constitutional Court, the item which was declared unconstitutional, reports that returning of the accumulated amount of money according to annual inflation does not extend to payments (7.5%) being provided by the RA state budget. The other anti-constitutional item reports that the Central Bank may not adopt legal acts on the management of pension funds, as, according to the Constitution, it can be done only by the government under the RA law.

According to the statistics, engagement of the private sector employees in this system is bigger than of those working in the state institutions. This is explained by the fact that starting 2015, citizens involved in the private labor market no longer have the opportunity to reject the system. As a result, the system has automatically grown. 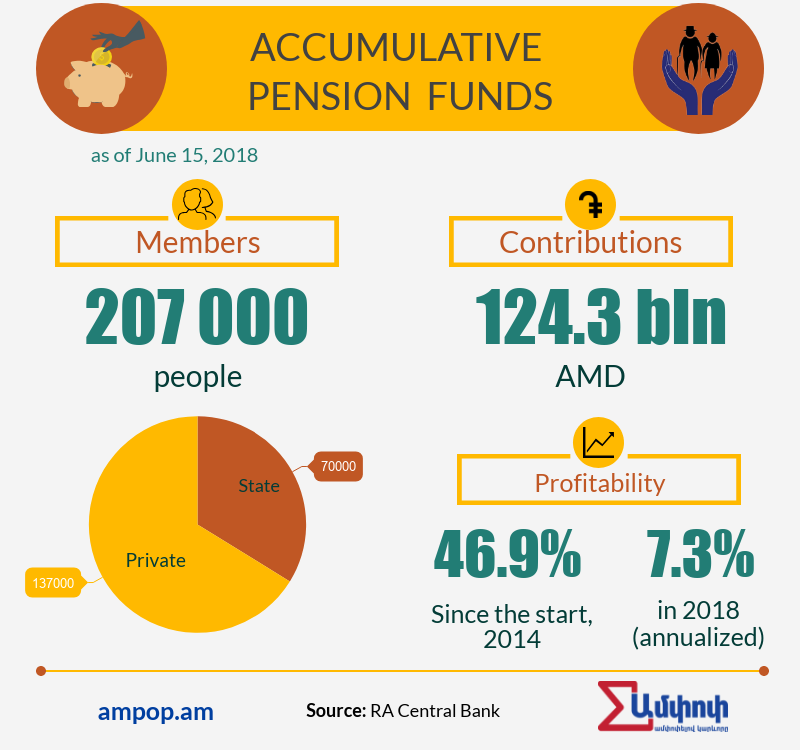 Assets’ management of the accumulated pension is implemented by two asset managing companies. These are: C-QUADRAT Ampega and Amundi-ACBA asset management companies. As of June 15, 2018, the amount of funds raised in six funds totals AMD 124.3 billion.

According to Karen Hakobyan, Head of Securities Market Regulation Division at Central Bank of Armenia, if the system had been fully operational in 2004, it would have had about 330,000 members now. However, due to the apathy of citizens and a series of changes in the law only 60% of the mentioned figure was available in the last few years.

The lion’s share of assets accumulated in funds is channeled to the financing of Armenia’s economy.

It is expected that the first flow of accumulated money will be returned to the members in 2036. However, representatives of the sector say that, in exceptional cases, members can get the accumulated money before reaching their retirement age. For example, if a citizen accumulates around 20 million drams of personal contribution, he or she can receive pension at  age 57.

“According to our calculations, if the citizen is a member of the system for 30 years, during the pension age s/he will receive 50-60% of his/her salary per month,” says Hakobyan.

A citizen who has been a member of the accumulative pension system in Armenia for a certain period of time, and who then leaves to become a permanent resident of another country, cannot move his/her savings. But the savings will continue to be managed and grow in Armenia. From the age of 63, regardless of their country of residence, the person may dispose of their funds. Foreigners who have worked and paid income tax and funded contributions in Armenia, may transfer their savings if they leave Armenia for a permanent residence in another country. 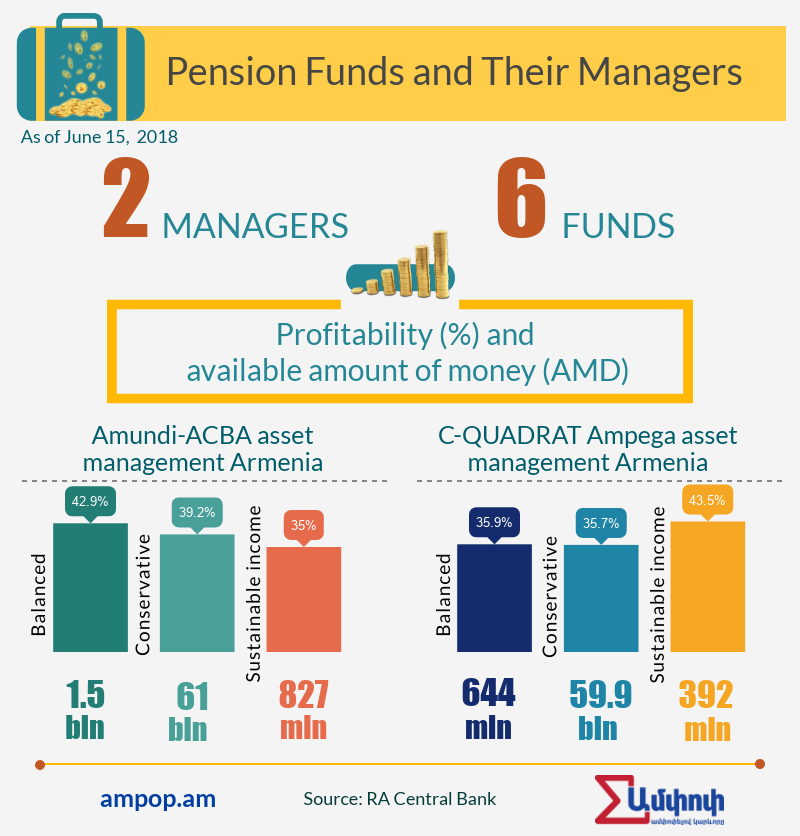 “Pension reform is fair inequality. That is, we are justly unequal. Those who earn more have to get more pension, those who earn less, have to get - less. Another issue is how to deal the situation with those who earn little: this is a matter of social policy. Its opposite was the equality-based Soviet system. That is to say, we all got equally, regardless of wages earned.”

Economist, expert at the International Center for Human Development

New Price Increases in 2018: What, why and how much?
Community Consolidation Reforms in Armenia. Residents’ Agreement Does Not Always Exist