This probably led to the long-lastinging process to stop in 2018, as if in one day. As a result, a situation was created in the country during which one part of the communities was ruled by the old model and the others by a unified one. Parallel to this, the administration of governors continued to operate, which was supposed to be eliminated after the community consolidation process.

On the basis of all this, we come to the conclusion that the newly formed government should immediately refer to this issue and present its programs and deadlines to the public as soon as possible about community government reforms in the Republic of Armenia.

With this journalistic-research, the “Ampop Media” wants to support all those who are not indifferent to the topic, or as a community resident, are directly related to this process and want to form their opinion on more grounded facts. Here you may be informed by which models local self-government is implemented in the Republic of Armenia, which are the peculiarities of management and budget forming in communities, how much is the average money the community budget may give to each resident.

The administrative-territorial units of the Republic of Armenia are marzes (regions) and communities. Anyhow, a separate group in communities has different nuances of management. For example Yerevan, Gyumri and Vanadzor communities have their peculiarities, the united communities – theirs. 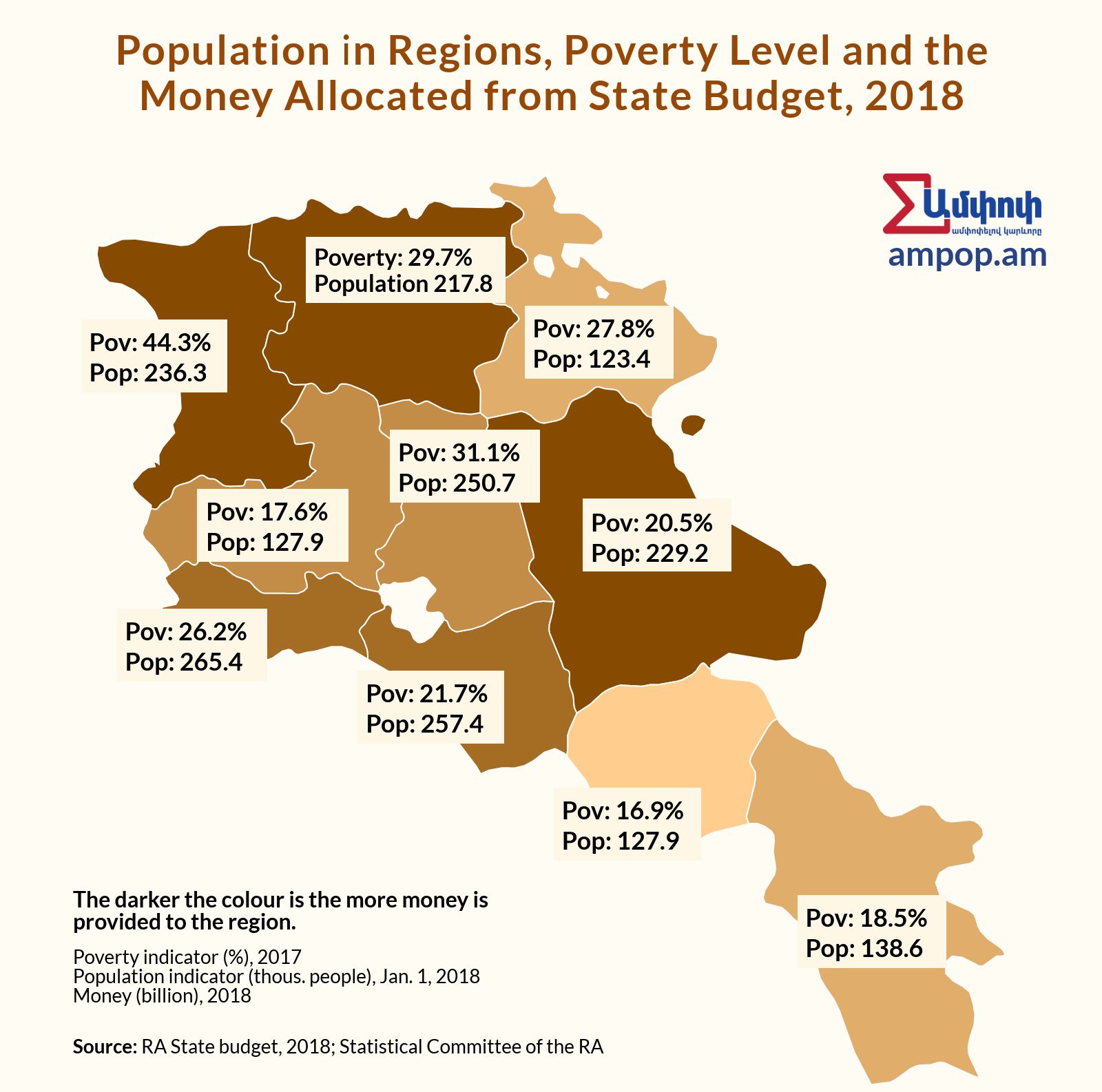 At current, 52 communities out of 502, existing in RA, are consolidated communities. Before consolidation, there were 915 communities in RA, 48%  of which had less than 1000 population. With the existence of so many small communities, the development of these communities and administration was considered not to be promising. Based on this, the government adopted the concept of community enlargement. However, awareness process had still begun  since 2008.

According to the president of «Communities Finance Officers Association» NGO Vahan Movsisyan, the main goal of the communities consolidation was to have a strong community and to prepare decentralization.

In 2015, as a result of the local referendum held in 22 communities in Lori, Syunik and Tavush regions, the first enlarged communities were Tumanyan, Tatev and Dilijan.

This means that a large settlement can be represented by a larger number of community members in the community council as there are more electors, unlike the small settlements included in the same community. These settlements may probably have fewer council members or may not have at all.

The same problem occurs when dealing with the budget problems. In this case the budget is formulated with the income of all the settlements, and expenses are allocated to all settlements. On one hand large settlements are concerned about the fact that their income may be directed to the small ones, on the other hand, the small ones are worried about their problems that may stay unsolved, as they are represented with less members and may get less money. 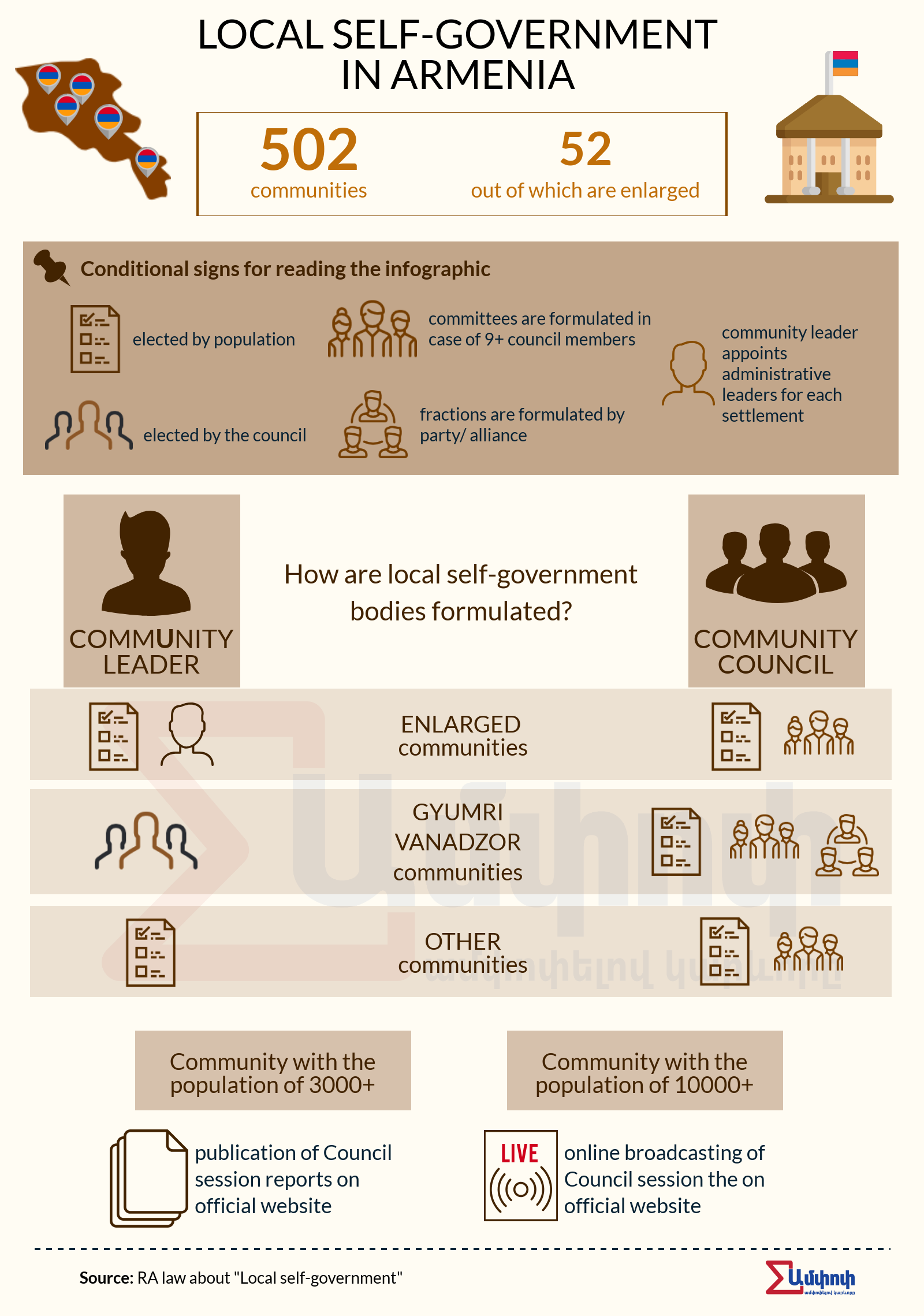 According to a study conducted in 18 enlarged communities until 2016, as a result of consolidation,  351 staff was reduced – becoming 801 out of 1152. Instead, 75 new workplace was opened with the aim of providing a service. In the mentioned 18 communities local income has increased but alongside with it the state-funded financial subsidies have also increased. The reason of the latter is -the more settlements are included in the community the more subsidies are provided to the community.

The last process of community consolidation was organized without local referendum. The recent enlargement was held on June 9, 2017 with the law according to which 34 communities consolidated, too. But experts did not take this phase of consolidation for granted.

“After the creation of 18 consolidated communities, some stop and study, strong and weak sides revealing and work with the population was expected to be held. However, The Ministry of Territorial Administration and Development started working on maps of consolidating new communities, most of which are logical. Anyhow, the list included such communities that did not have even a common border with each other”, says Vahan Movsisyan, the president of  «Communities Finance Officers Association» NGO.

According to Movsisyan, at that stage, the regions, such as Kapan, Sisian, Aparan, were also under the scope of consolidation. “Meanwhile, if we follow the regional model of consolidation, we must also reshape the government system.  It was a political action (by the previous authorities), which was assigned from the high-level authorities with the purpose of ” sewing a suit” for some people, ” says Movsisyan.

How is the Community Budget Formed?

The community budget consists of administrative and fund budgets. Taxes, duties, official grants and other incomes make the administrative budget. The Fund’s budget is mainly intended for additional income and closing of the deficit.

The community has mandatory and voluntary problems. Only in case of additional financial resources, communities have the opportunity to solve voluntary issues. Compulsory problems include improving the business environment in the community, organizing pre-school and out-of-school education, organizing cultural, sports life, social protection of the population, residential development, refurbishment, scavenging etc. Community budget and 5-year development plan are aimed at solving these problems.

Write down the marz or community name and press ENTER. Data are calculated according to community expenses in 2017 in fact. In case of those communities where  the actual expense had deficit, the adjusted annual plan was used.

In order to provide the harmonious development of communities, subsidies or grants are provided from the state budget to community budgets. In 2018, it has allocated more than 48 billion drams, which is 3% of the budget.

The RA Law on Financial Equalization was adopted on October 20, 2016. One of the principles of grant providing is to mitigate the disparity between the community’s financial capacities. Depending on their own needs, the communities decide themselves on how to spend the subsidies. The state can not interfere into the process of subsidizing.

As a shortcoming of the system, they underline the fact that their actual financial needs and differences are not taken into account when evaluating the financial capacity of communities. Regardless of the degree of poverty, all communities are subsidized. Yerevan was provided with the most subsidy, about 28% of the total amount. Ararat region has the largest subsidy out of  the regions – 4.5 billion drams, and Vayots Dzor region has the least one – 1 billion drams.

Article and infographics by Astghik Gevorgyan

Accumulative Pension: Providing for Your Own Retirement
Ban օn the Import of Right – Hand Drive Cars in Armenia