The law usage coincided with the post-revolutionary period and with the formulation of the new government. As a result, the law was used partly. But the citizens’ complaints about this issue did not get their exact answer.

The current government does not deny the previous decision. As a result of the recent discussions with the stakeholders at the sitting on 6 December, 2018, they agreed to allow the import of right-hand drive cars for a short period of time. But the decision referred to only the cars which had gathered on the border of Armenia and had no legitimate grounds for entry as of December. A draft law was formed on the basis of this decision which was under discussion at the sitting of 15 February. But it stayed out of the agenda as it  needed to be upgraded.

A lot of dissatisfaction waves allow to conclude that the processes on this issue are very slow in the state government.

Members of the “Right-hand drive” initiative hold a protest on 31 January demanding to adopt the draft law as soon as possible and mention the drivers’ interests in the document. In the protests like this the initiative members are united with the same requirement, that is, to cancel all the obstacles concerning the right-hand drive cars.

The “Right-hand drive” initiative member Zohrab Igityan in the interview with  Ampop Media states that as of law the draft is being cancelled at the sitting.

“They assure us that the issue will be discussed at the next sitting of the government”, said Igityan on 31 January. But the issue was discussed in the sitting of February 15, and the draft  was removed from the agenda.

Prime Minister Nikol Pashinyan disagreed with some suggestions of the draft stating that the decision should refer not to the bought cars which are in the way but exclusively the ones that have gathered in the customs house until December. During the session, RA Minister of Transport, Communication and Information Technologies Hakob Arshakyan clarified that the number of the gathered cars till December is 442. In response the Prime Minister mentioned that the agreement had been made with those 442 importers.

According to Igityan the cancellation of the draft becomes a reason for the right-hand drive cars to continue gathering on the border of RA and reaching to 600.

Minister Arshakyan reminds that the agreement on the issue had been quite different. “The National Assembly will adopt a law that will allow the import of the cars which have gathered on the border till December 20 and everything will be over”, says the Minister.

The Former Minister of Transport, Communication and Information Technologies of RA Vahan Martirosyan states that the number of the accidents involving right-hand drive cars is more by 28%  than the ones with left-hand drive cars and the number of the injured – more by 39%. So, that is how the Minister grounds the need of adopting a law which will ban the import of right-hand drive cars. But it is not clear for which period the Minister’s statistics refers to and which sources and calculations it is based on.

The technical regulation of the The Eurasian Customs Union(EACU) “On the safety of  wheeled vehicles” (TC TR 018/2011) may also be considered as a grounding to ban the import of right-hand drive cars to Armenia. The regulation was adopted on 1 January, 2015, and it bans the usage of right-hand drive cars in the teritorry of the Customs Union but the ban does not refers to sedans.

There are two paragraphs in the regulation of the right-hand drive cars, in one of which there is a ban on M2 and M3 type cars. These are 8 and more passenger buses. The second paragraph refers to the ban on the usage of right-hand drive cars in Kazakhstan and Belarus. This ban has already been applied in the mentioned countries. 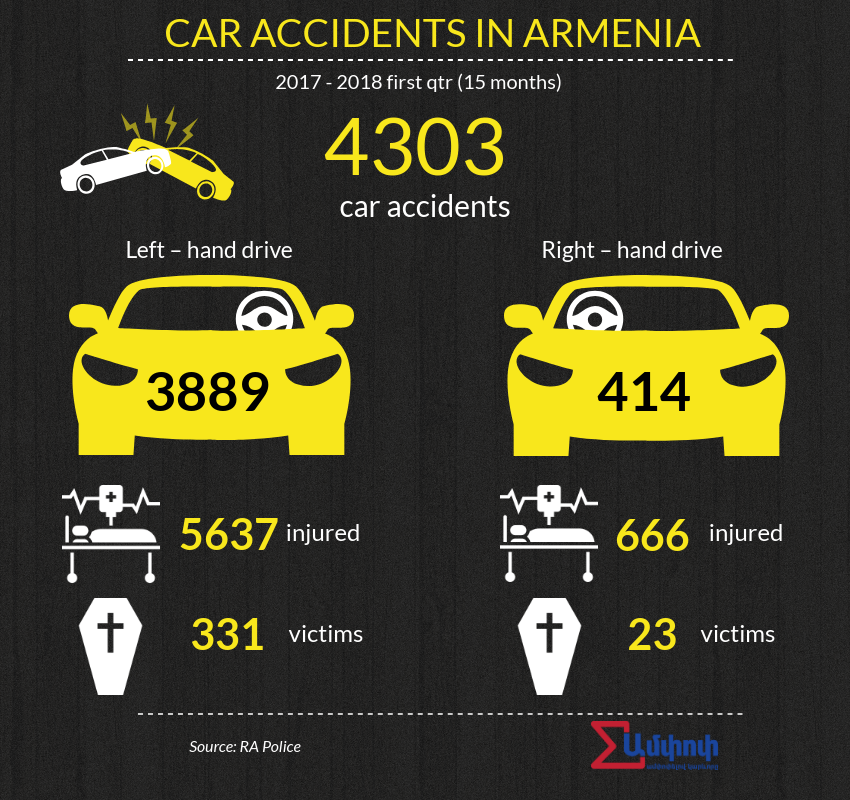 The information about the number of the right-hand drive cars which pass the border of  RA is also limited. According to the response of the State Revenue Committee of the Republic of Armenia the vehicles on the border are separated by the engine’s operating capacity, by the format of new or used and no way on the basis of the right or left-hand drive.

The Minister of Transport, Communication and Information Technologies of RA Hakob Arshakyan was against the limiting of the usage of the right-hand drive cars before being appointed Minister.

But after the government sitting on 25 October, 2018, in the interview with journalists he stated that the ban was set by law and that the Armenian roads were not intended for the right-hand drive traffic. The latter seemed to have been known before, too.

Arshakyan also said that the right-hand drive cars may also be imported as spare parts. During the discussion in the Ministry this proposal was viewed as one of the most appropriate solutions to the problem. Besides, it was mentioned about the change of the wheel, as well as about the import of the cars with transit state license plate to a third country in order to sell.

Vice-president of “Citizen, Taxpayer, Business Rights Protection” NGO Eduard Badalyan in the interview with Ampop Media  says that the import increase of the right-hand drive cars is evident in the recent years. In his opinion the reason is  the demand for the car prices and solvency.

“This is an axiomatic truth and there should not be even a quarrel about it,” says Badalyan and in his opinion the solution is the absolute ban on the import from a third country.

“By the way, there should be a ban on the import of such cars which have been changed in a third country or may be changed in RA. The repair may be safe only in factory conditions. And the usage of already imported vehicles may contionue until they gradually get out of  usage, so that the people who have that kind of vehicles do not find themselves in an wakward position”, states Badalyan.

Meanwhile, human rights defender Movses Aristakesyan thinks that this decision directly contradicts  to the norms of property defined by the RA Constitution and its immunity.

“First, right-hand drive cars are cheap and available for wide layers of society. So, no one can limit the right of a citizen to have any property,” says Movses Aristakesyan, head of the “Center of Economic Rights” NGO.

“At last, as a result of this legal regulations, the market of right-hand drive cars gets narrower. First, the price of these cars will be decreased, which will make their purchase and sale more expensive, the price of spare parts will increase, and this will become a matter of concern for the owners of these cars”, concludes Aristakesyan.