This article is also part of the series entitled “Economy and Society in the Provinces of the Republic of Armenia”. It briefly introduces the data of livestock production and yield of basic agricultural crops in the first half of 2019, comparing with the data of the first half of the previous year.

The innovative approach of the article gives the reader an opportunity to put together the infographics of the two neighboring provinces and compare the data of each province and the two different provinces on their own.

In the first half of 2019, the yield of basic agricultural crops of Armenia, such as cereals, potatoes, vegetables, fruits and berries, comprised 171 200 tons, down 21% from the same period of the previous year.

The main part of the agricultural production, 62%, was provided by Armavir province. In the first half of 2019, vegetables were mostly produced – 54 300 tons. And the yield of fruits and berries has fallen by 46%. The agricultural products have not yet been harvested in Gegharkunik province as there are no suitable climatic conditions for the main crops in the first half of the year. Harvesting in this province begins in the second half of the year.

The visual images below reveal the socioeconomic data of the 10 provinces. 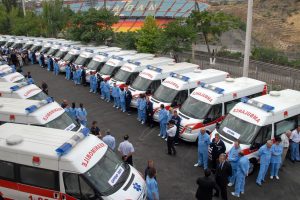