24-year-old Araks Gareginyan, who was working at the main school of Karmravan community in Shirak region, recently quit her position from the educational system. The conditions were not appealing. She daily went through 13km to reach work from a neighboring community called Ashotsk. Moving from one community to another was quite hard for her due to the lack of transportation. That is why she had to leave.

“There was a problem with my salary. I was paid on hourly bases and the distance was too much. The transport passed by the community, but you had to walk quite a while to reach the school through heat, cold, storm and rain. Aside from that, the school has only 34 students. I had a feeling that it won’t function soon.

Although professionalized in biology, Araks taught three subjects additionally – biology, chemistry and science. To teach those two subjects Araks had to take trainings provided by the Ministry of Education and Science.

“My specialty is biology, but I master chemistry and science as well. I don’t think that I failed while teaching any of those subjects,” says Araks.

Araks is not the only one teaching more than one subject at school. This is how the school tries to fill the lack of employees. The school has 11 pedagogics, who work with only 34 students. Because of the small number of students the same subject is taught in two classrooms simultaneously. 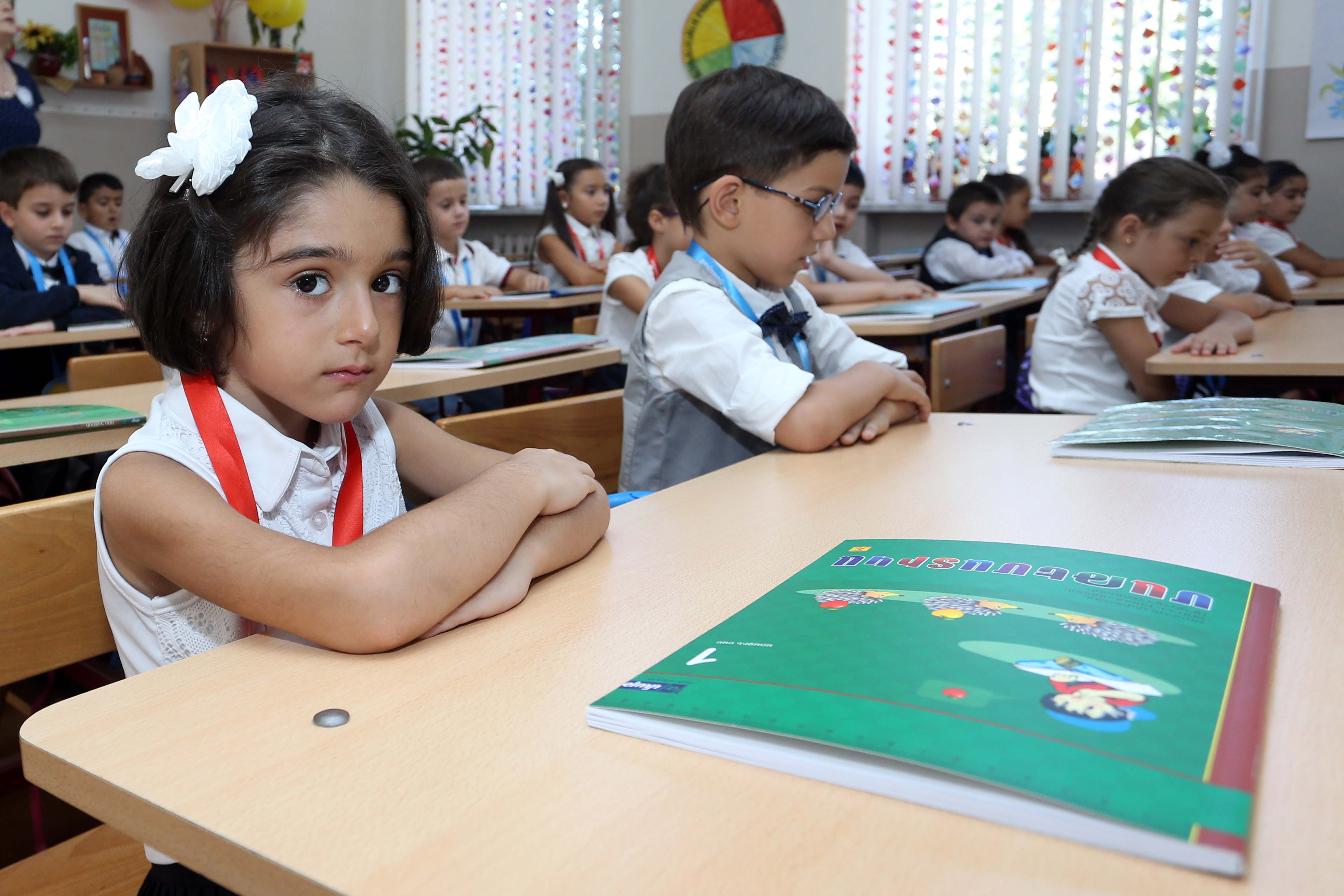 Lack of teachers in educational system is one of the major issues in the Armenian Republic. The absence of necessary specialists is the reason why some subjects are either out of the curriculum or delivered in a poor manner.

According to statistics in 2016-2017, more than 30 educational institutions of rural areas were lacking qualified teachers. Aragatsotn region 6 students, Gegharkunik region 11 students, Lori region 3 students, Shirak region 6 students, as well as one student per Syunik, Vayots Dzor and Tavush region were not taught the mentioned subjects.

Simultaneously, both chemistry and biology were not taught at schools of Aragatsotn’s Shamiram community and Gegharkunik’s Tshambarak and Djil communities.

According to the statistics provided by the Ministry of Education and Science of the Armenian Republic, there was around 1245 open positions in 457 schools from the period of time between 2017-2018.

Araks claims that the lack of teachers comes from the huge distances and the small number of students, which dictates the amount of salary. She states that it’s possible for her school to also stop teaching or deliver poor knowledge of a particular subject. 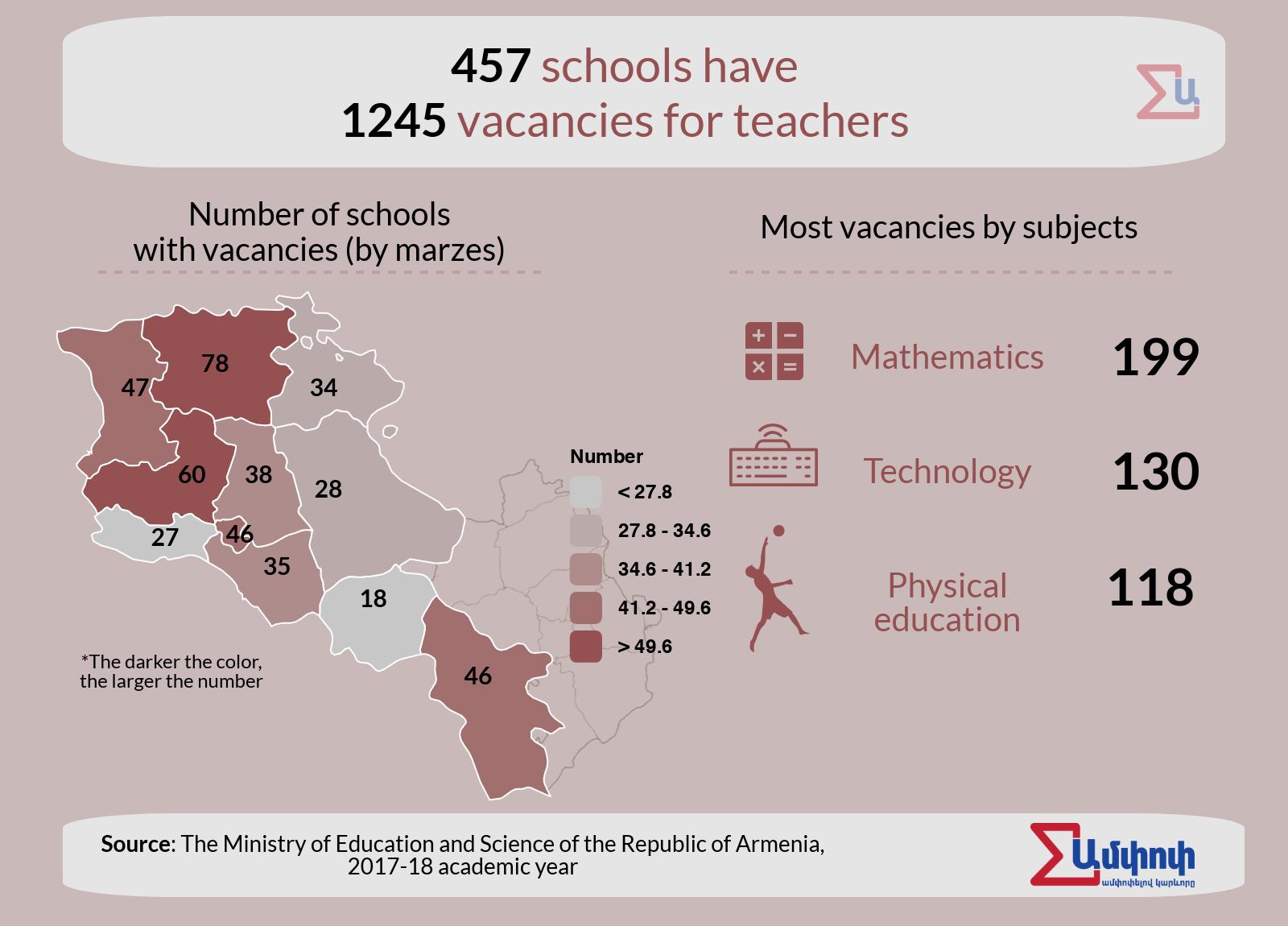 Educational expert Serob Khachatryan explains the situation with the fact that the village population is small and it lacks qualified teachers.

“A small rural area has maximum 1-2 applicant per year and even then the specialization is different than what intended. There’s only two solutions to this issue; one would be the support of the government in providing additional privileges to the people who would agree to move to a rural area for a job,” says Khachatryan. According to him, the government should provide them with a high salary and accommodation.

Incidentally, a similar project has already been implemented not by the efforts of the government, but by Teach for Armenia organized in the frames of Teach For All international network.

The structure of the project has 25 years of history. It’s a successful project aiming to implement social changes through collaboration with 40 non-governmental organizations all over the world to create a platform for best experience and knowledge. Every year nearly two dozen of trained participants-pedagogics of the project move to different rural areas in Armenia and teach for two years. However, the project solves the issue only partially.

Positions in Pedagogy without applicants

According to 2017-2018 statistics, 457 schools required teachers. 51 out of those schools were in Yerevan. The capital city lacks teachers mainly for the subjects of Armenian language and literature, biology, geography, mathematics, physics and chemistry.

Teachers for the mentioned subjects are absent also in the largest cities after Yerevan. Gyumri had 5 and Vanadzor had 8 unemployed positions.

The lack of spots were filled by the pedagogics, who taught several subjects at once. The Ministry of Education and Science assure that the teachers went through training before teaching the additional subjects. Around 12763 have taught more than two subjects in RA educational institutions from the period of 2017-2018. Meaning that every 3rd of 38270 teachers has taught one or more subjects in addition to his/her specialized field.

After the review of large cities, smaller towns and villages have a much more serious conditions regarding this issue. For instance, the school named after Charents in the city of Alaverdi had 8 free positions for 8 subjects. Similarly, Tsaghkashat community had 10 free positions for 9 subjects. 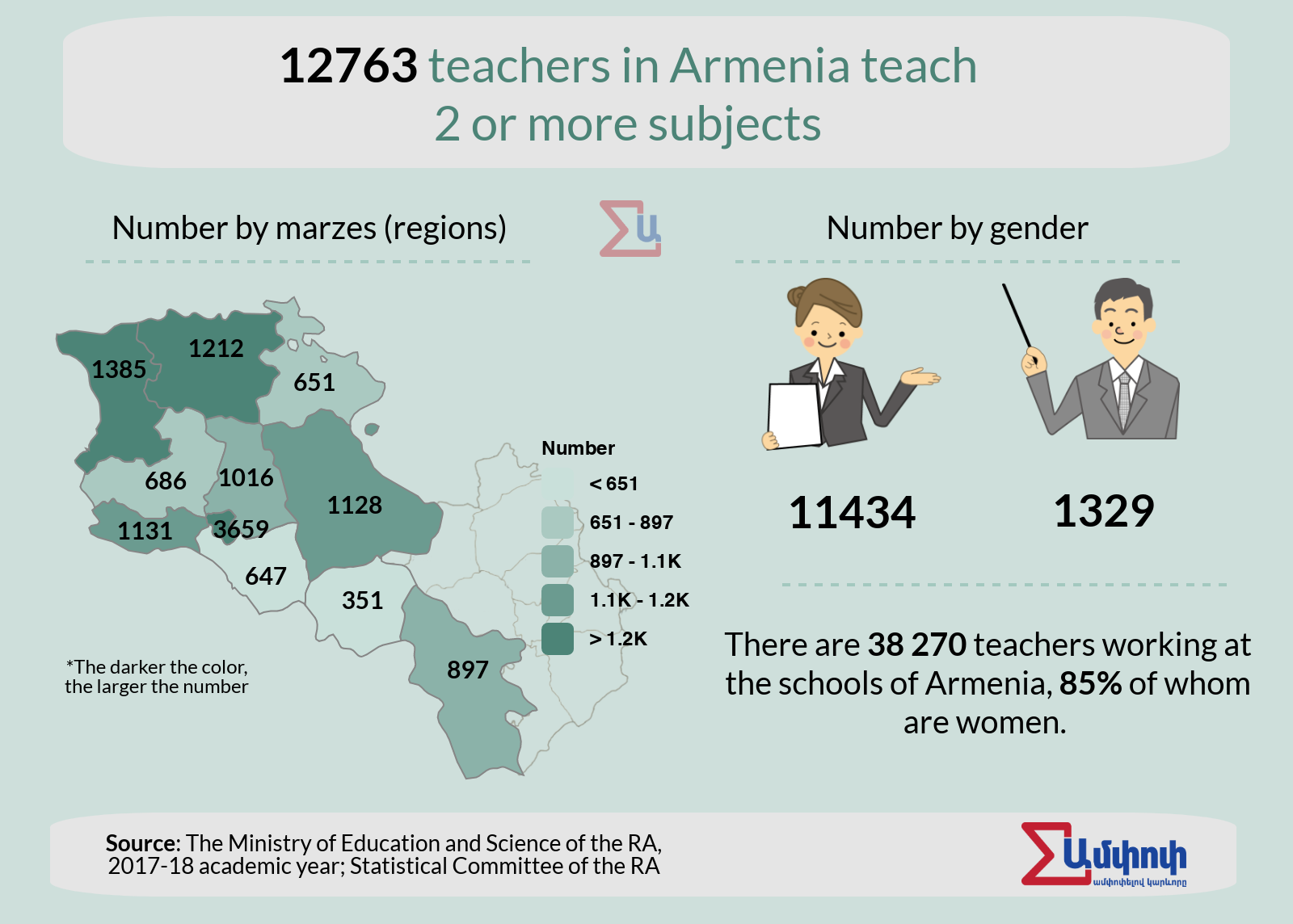 The reason people don’t apply for teaching positions is the low salary, lack of students and employment, as well as simultaneous teaching curriculum. This sentence sums up the situations in the country.

To respond Ampop’s request, the Ministry of Education and Science of RA informed that the average salary of a middle school teacher consists of 152.117 AMD. A full time position requires 22 hours of work.

Considering Armenian reality, it seems impossible to have unemployment because of a salary, however, even the teachers, who take on more than one subjects get rarely paid their full time earning. Aside from that, 25% of the salary is kept as an income tax. The teachers of the villages have additional issues; they struggle with the distance and transportation.

Serob Khachatryan came up with another idea to solve this issue. This time it involves online courses. He claims that it will be more effective than forcing dozens of teachers into moving to far regions and providing them with every necessity. The subjects will be taught online and the students’ performance will also be supervised online.

Optimization, which in other words is closing schools, is another problem in educational systems. According to Ministry of Education and Science statistics, during the period of 2016-2017 there functioning educational institutions consisted of 1432 schools, while from 3017-3018 it dropped to 1421. Overall, 11 schools stopped functioning.

Nine public schools were closed from 2017-2018, which were located in Vayots Dzor, Lori, Shirak, Armavir regions and Yerevan.

On August 24, 2018, another government sitting came to a decision that connecting some educational institutions (both in Yerevan and the regions) will reorganize and solve the situation. There was also a decision to restart School N26 in Vanadzor, while the Metsadzor school in Aragatsotn region was closed due to having only 2 students. It’s also important to mention that there were functioning schools in the village areas before the announcement of the previous passage.

According to Avetik Mejlumyan, the head of the Public Policy Institute, school optimization has left specialists unemployed, some of which eventually chose a different career path. From the outcome of the reorganization, the most successful educational institutions had announced job offers to some teachers of different schools.

“The principles of the closing schools have left their jobs and some of the teachers have already retired. Municipality of general education department in Yerevan as well as some faculties in the regions have announced job positions, however it lacked systematic approach. They helped whoever they could,” says Mejlumyan who was the lead in observing the outcome of optimization.

The evaluation of the finished work or as they called reorganization showed that three out of six schools were in a worse condition than the ones which stopped functioning. The condition includes the building and the furniture. On average the new changes only increased the time a student should take to reach the building. Same statement follows the teachers.

The research shows that providing transportation in villages is a hard process. The reasons for that are the uncomfortable vehicles, disorganized timetables, as well as financial issues of some families. The school optimization became a reason of immigration both from the region and from the country.

The only positive outcome of the reorganization is that students multiplied, which now makes it possible to compete, create social relationships and “open up” the “closed” cultural life that was going on in the villages.

Avetik Mejlumyan claims that the unemployment arises also from the hard schedule of teachers. “They do a great amount of technical work as well. That includes filling in electronic details, making agendas for every student individually and so on. This can be solved by requiring a teaching assistant, who can simultaneously help several teachers. I believe this will eliminate the tension of the work,” he says.

Gaps of Mandatory Education
In 61 out of 97 communities of Armavir region is lacking kindergartens.