In 2017-2018 academic year around 274 children in Armenia did not attend schools. While the current legislation states that every six-year-old child must exercise a 12-year education.  Thus the current situation proves that the law defined by the RA Constitution is being broken.

It’s curious whether parents who broke this law by leaving their children out of the educational system support the mentioned statement.

Ampop Media tried to study why these children do not attend school and who is responsible for violation of their right to compulsory education.

106 children without use of the right to compulsory education were registered in October 2018 in Lori region. The data was provided by the Department for the Protection of family, women’s and children’s rights of the Lori Municipality. 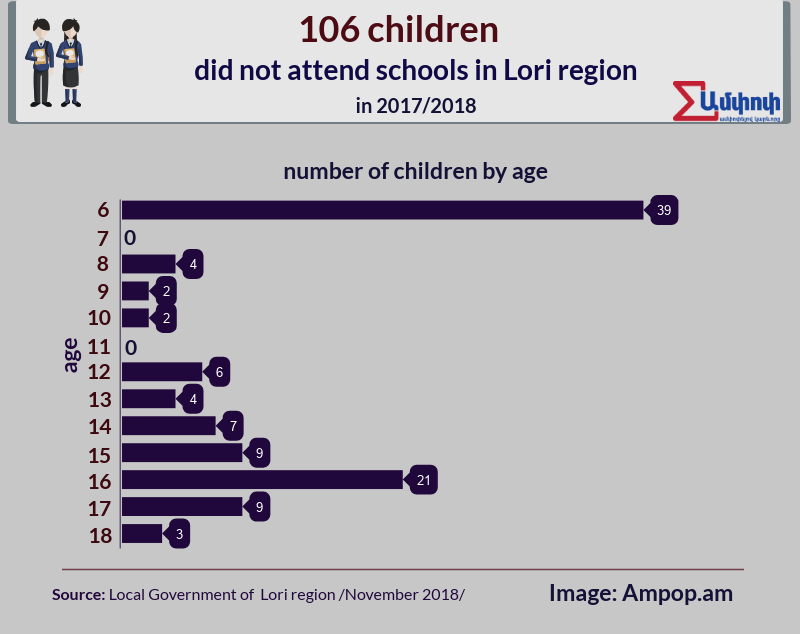 Most of these children are 6-16-year old who are to attend 1 to 10th grade. According to the regional municipality in the case of the 1st graders mostly the parents make a decision not to take the kids to schools.

“For a 6-year child the parent says s/he is too young and will not bear the overloaded schedule, that they plan to go to school when 7 so to study well. As regards elder children the decision of not attending school may be made also by the child,” junior specialist of the Department for the Protection of family, women’s and children’s rights of the Lori Municipality Ani Ghazaryan says.

According to Ghazaryan, not all parents know about the 12-year mandatory education law. They consider that a child can leave school after 9th grade. “We have families where the parents say well what kind of education does the school give? I’d rather take my child to learn crafts”.

In accordance to the UNICEF professional observation, the “left out” children divide into 3 groups. First group is called visible, as the children attend schools, but stop midway.

Second group is called semi-visible, where the children are included at some information system, but are disabled or belong to a family with financial issues.

Third group is called invisible. Children from this group are not included in any information system, as well as children who have been left out of the educational system by either stopping half way or not attending from the beginning. 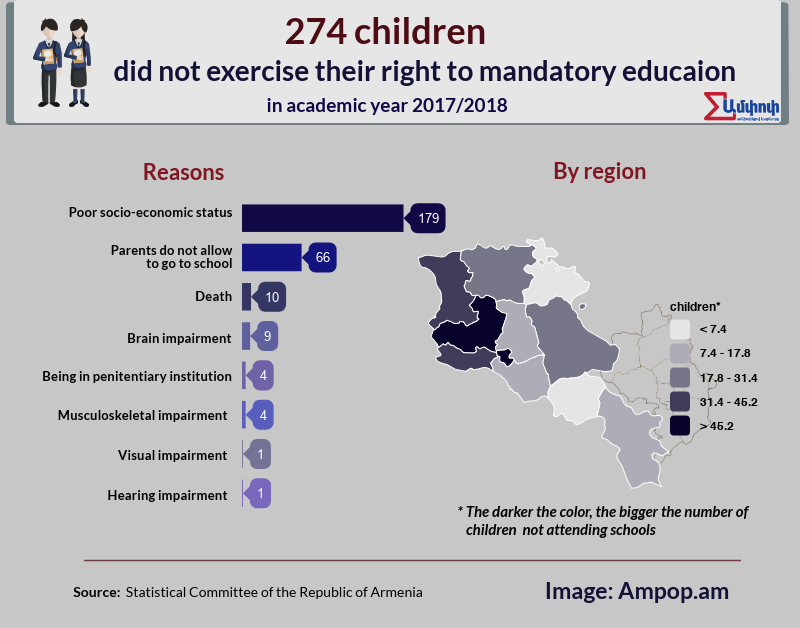 Out of 106 children 12 returned to schools due to the efforts of the Municipality employees.

Based on the decision of RA government, Ani Ghazaryan, together with her colleagues, conduct home visits to find out the reason behind students’ absence.  A social worker or education officer accompanies them depending on the issue.

Ghazaryan points out that often times the visits are problematic, as some parents ignore the conversation or even start to act aggressively towards the unwelcomed guests.

“There was one time they called the police and reported that we have invaded their home. But we don’t do anything illegal. We just conduct visits based on our department charter and government decision,” says Ani.

“Ampop Media” also tried to contact some families from Vanadzor, whose children do not attend school. While the parents rejected to meet up with the journalist, it was possible to understand the reasoning via phone call. Almost all of the families insisted that taking or not taking their children to school is their right.

One of them stated the family member is sick and there is no one to take the child to school. Another one said that despite their efforts to convince him to try their son refused to enter high school, as it is not interesting for him.

“In my opinion, the reason why students refuse high school is because it’s totally empty if we talk about the content. Everything is based on repetition. If it adds empowering classes of sociology, applicable science together with cooperation with universities to determine professional path then high school will hold an important place in students’ lives,” says Vahram Soghomonyan, the member of Civic Educational Initiative.

According to him, the reasons for absences in many places may also be the stratification of high school locations as a result of previous reforms.

During the interview with Ampop Media, Aren Yeghiazaryan, the chief of local government’s family/women/children human rights department in Lori, stated that the problem can be solved through legislative amendments.

“We tell the parents that the fine is envisaged in the Criminal Code of fifty to one hundred minimal salaries. But even that they pay and still don’t take their children to school. That is not a solution to a problem,” says Yeghiazaryan and continues, “The community should sue the parent, but the community leader doesn’t accept that option, while some parents refuse to take their children to school saying that they know better. This problem can’t be solved by court. There’s a gap in the law”.

The case of Lori

UN in cooperation with UNICEF, Ministry of Education and Science and the local government of Lori implemented an experimental project in the frames of “Children left out of mandatory education” a couple of year ago. For two years all the communities of the region have been investigated to disclose the missing children.

Around 228 children were found in Vanadzor and Gugark cities, out of which 212 were 6-8 years old and 16 were 9-16 years old. The main reasons of their absences were disability, cultural peculiarities, language barrier, migration, extreme poverty or unfortunate family issues.

In the result, around 83 children continued attending schools, 72 children aged 6-7 went to first grade and 11 children aged 9-16 restored their study.

The Ministry of Education and Science stated that the outcome of the project that included disclosing, registering and directing to the right path was great, which is why the RA government made a decision to implement the project in every region.

Mane Tandilyan, the person temporarily responsible for RA jobs and social issues stated that the child education right is a fundamental right, which should be protected not only by the efforts of Jobs and Social issues ministry, but also Education and Health ministry, if not the entire country.

“Yes, that is a serious problem. The system of social work that we are trying to improve includes the following – research, observation and elimination of the problem. Type of work exists and is in progress. We are trying to accelerate and improve because it’s not enough. To be honest, we have not reached to a level where we can protect the education rights of socially insecure, they often times go unnoticed,” said Tandilyan to “Ampop”.

The ministry of Education and Science in Armenia together with the ministry of Health and the ministry of jobs and social issues have presented the confirmation outline of the project (“The disclosure, registration and direction of children education rights”) by the RA government.

The document states, that the outline aims to realize every child’s education right. It is planned to regulate the student registration system, provide with regional and self-government bodies, all responsible structures and obligation of concerned bodies to include the children in general education.

Story and Infographics by Gayane Melikyan

Schools without teachers. Why so many vacant jobs?