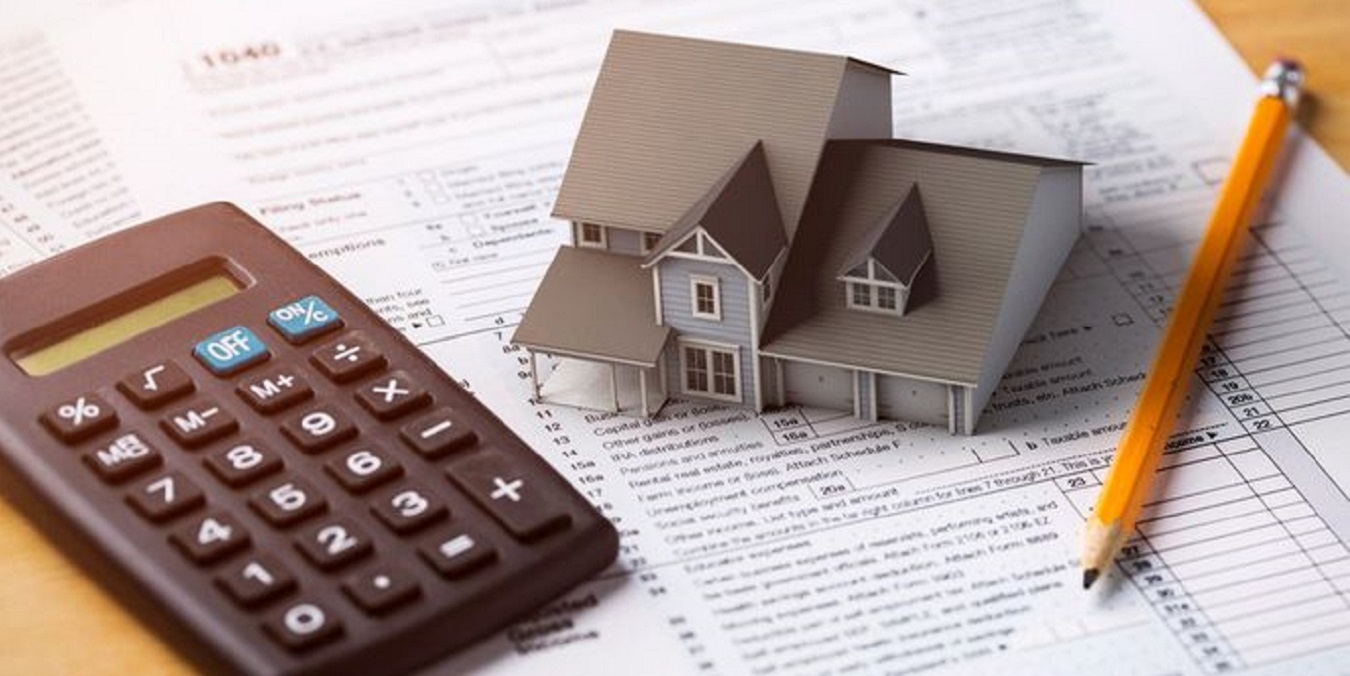 A new system of real estate appraisal and taxation is being introduced in Armenia. Under the new procedure, property taxes will be calculated on the estimated market value of a property rather than its cadastral value.

As a result of the new system, which will come into force on January 1, 2021, property tax payments will increase. However, in order to prevent a sharp increase in the tax burden, the Government of the Republic of Armenia will implement the new system gradually. It was initially planned to implement over the course of a four-year period but after the second reading it was decided to implement during the next six years.

The Government considered these amendments in the Tax Code to be urgent. It has already been discussed, adopted and sent to the National Assembly.

This journalistic analysis was published by Ampop Media on June 24, the day of the first reading of the draft in the National Assembly. The next day, June 25, the draft was adopted in the second reading with a number of supplements and in complete.

Prime Minister Pashinyan described the changes as “changes of revolutionary significance”, directly relating it with the flat income tax. According to the Prime Minister, if some people think that the principle of social justice has been violated by setting a flat income tax, it will be restored by introducing the new property tax system.

“There are castles that, for example, pay 800 thousand drams (about $1700) a year but after the amendments, they have to pay 15 million drams (about $30 000). It is obvious that this 15 million drams is not a big deal for those owners. In any case, if a person was able to build this kind of castle, it should be this way.”

The Government does not conceal the fact that the changes are not only for the purpose of adequate taxation of visible wealth [luxury house] or property but also for the collection of the local budget. Real estate tax is an essential source of income for community budgets, and, as it is mentioned in the justification of the draft, it is practically not used in Armenia.

According to the estimates of Atom Janjughazyan, Minister of Finance, as a result of the amendments, the property tax revenues will increase up to 4.3-fold. The budget of Yerevan alone will increase by 45-50 billion drams.

However, Gurgen Aslanyan, President of the Armenian Economic Association, thinks that problems will arise when appraising the real value of the “castles”. “There are a couple of such castles in Armenia and their market value is unknown. It means it is unclear what that percentage will be calculated from – a million or a hundred million?”

Aslanyan does not rule out that the rich can sell their residential houses to their relatives at an arbitrary, rather low price and state that this is the market price. This is the reason why, according to Aslanyan, the amendments in the property tax should be in the context of income redistribution: it should become a luxury tax to some extent.

Non-taxable threshold will be eliminated

If the National Assembly adopts the bill without any changes, there will be no more property exempt from tax in Armenia. The draft proposes to eliminate non-taxable thresholds for apartments and residential houses, setting a tax rate of 0.05% for apartments worth up to 10 million drams (about $20 000) and for residential houses worth up to 7 million drams (about $15 000).

There will be no property exempt from tax in Armenia.

Based on the draft justification, “this will contribute to redefining of property rights and strengthening the culture of paying taxes.”

According to Babken Tunyan, Chairman of the NA Standing Committee on Economic Affairs, these amendments will purify “the distorted picture of cadastral values and property tax.”

There are 107 thousand apartments in Yerevan alone, which have a cadastral value of less than 3 million and property taxes are not levied.

The low cadastral values are due to the date of construction of the building and the zoning of the location.

Tax base and rates

The procedure for cadastral appraisal approximate to the market value of real estate was adopted in November last year and will enter into force on January 1, 2021. This law defines the formulas for calculating property taxes, which vary depending on the type of real estate.

With the changes in taxation adopted by the Government on May 27, new scales of the tax base are defined, and in some cases, new rates. They are different for apartments and residential houses. Each of these groups, in turn, has six levels. That is, the higher the value of the property, the higher the property tax. 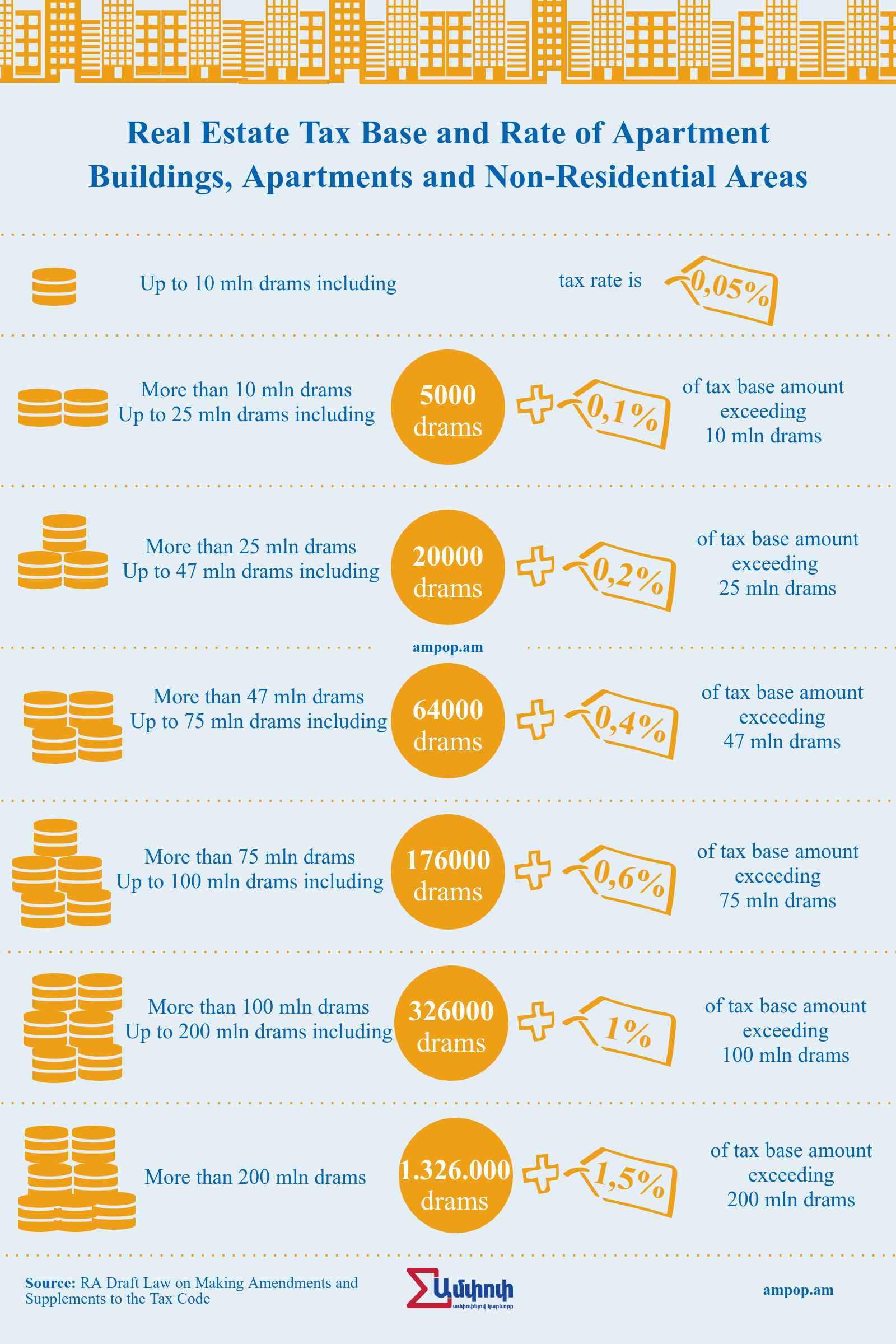 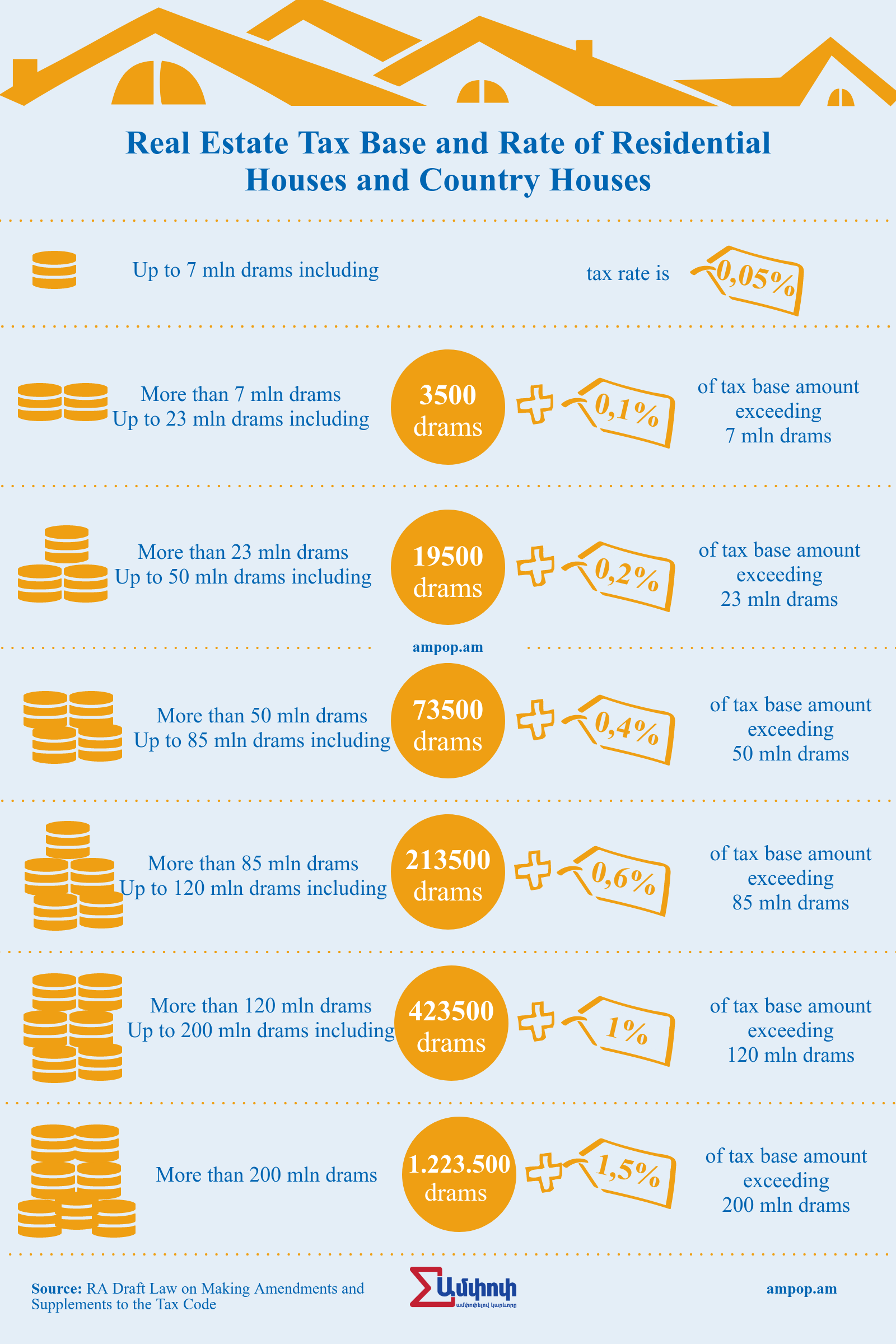 Social problems will increase in case non-taxable threshold is eliminated.

During the interview with Ampop Media, economist Karlen Khachatryan expressed an opinion that a citizen should have tax discipline, and the cadastral and market values of the property should be as close as possible but it will not be possible to achieve the desired result with drastic measures.

“The amount of levied tax should always be matched with the income of the beneficiaries. The current minimum wage and pension are crucial here. In case of elimination of the non-taxable threshold, there will be almost no property exempt from tax in Yerevan. This, in turn, will increase social problems,” he said.

For example, if a pensioner has an apartment with an area of 50 square meters in the small center, its current property tax is 4,000 drams (about $9) annually, based on the cadastral value. After the changes, when the estimated market value of 32-33 million is taken as a base, the property tax will increase about 12-fold, up to 48,000 drams (about $100).

Referring to the Government’s statement that a fairer tax burden is imposed on luxury property, Khachatryan said that in order to tax it adequately, it was possible to set an incomparably high rate starting from a certain value, and instead of eliminating the non-taxable threshold, it could be raised in case of value review.

Vahe Danielyan, Director of the “Kentron” Real Estate Agency, says that if the apartment in the center of Yerevan is rented, the property tax will not greatly affect the owner’s pocket. However, it is obvious that the rent will increase.

Another case is when the owner of an apartment in the city center has inherited it and lives there. For an owner living on an average salary or a pension, a property tax that has already been increased more than 10-fold will be a great social burden.

Who will dictate the market value?

According to the legislative amendments, the property tax will be determined taking into account the market value. A qualified appraiser will be based on the most plausible sail price in the real estate market.

As of June 1, 2020, the Cadastre Committee has issued such certificates of qualification to 88 people.

However, an online calculator will also be available in the Cadastre’s electronic system, where, by entering the relevant data, the owner will find out the amount of property tax to be paid after the current changes.

Suren Tovmasyan, Head of the Cadastre Committee, notes that real estate prices will be revised at least every two years, and if the values are changed, the property tax amount will also be changed.