The Armenian-based 7 air carriers were deprived of the opportunity to fly in the territory of the European Union starting from June this year.

Does Armenia have 7 air carriers? And did they fly to the EU? Most of us will wonder when reading this news.

Interestingly enough, yes. In fact, there are even more air carriers registered in Armenia. And only two out of seven flew to EU countries. In the last two and a half years, 12% of the total flights of those two fell to the EU countries.

The above-mentioned 7 air carriers can still fly to other directions but not to the EU. The reason is that the Civil Aviation Committee of Armenia, as well as the 7 airlines certified in Armenia, do not meet international safety standards. That is why they have been added to the “EU Air Safety List”, which is unofficially called the Black List.

Ampop Media has studied when and how the Armenian-based air carriers can resume flights to the EU, why they were deprived of the opportunity to fly to the EU, what impact it had on our country’s air communication.

What Problems Are There? When Will They Be Solved?

The fact that the European institutions have distrust also in the RA Civil Aviation Committee, Tatevik Revazyan, the Chairman of the committee, explains by the lack of necessary human and financial resources.

According to her, both the specialists and their salaries are not enough for the oversight functions that the Committee has.
In response to the inquiry of Ampop Media, the Committee informed that, in general, they have only 55 employees. The employees receive higher than the average salary in Armenia, except for one technical employee.

30 flight safety specialists work in the Committee with an average of 268 thousand drams ($552). And the supporting employees, who provide the general activity of the committee, the so-called office workers, are 17 with the salary of 262 thousand drams ($540).

The Civil Aviation Committee plans to engage new specialists and increase the salaries of the existing ones by introducing new financing mechanisms. Revazyan has already announced that they plan to introduce legislative changes so that in addition to state funding, they can switch to self-financing.

By saying self-financing, the Chairman of the Committee means charging for their services, also providing private services, which can bring income of thousands of dollars to the Committee.

The other problem, according to Revazyan, is the airlines that have been certified in Armenia for years but have operated in African countries.

“Mars Avia” can serve as an example which is registered in Armenia and is based in Poland, Somalia, and the aircraft operates in South Sudan, the Central African Republic and Chad. At the beginning of 2020, inspections carried out in Armenia resulted in suspending the certificate of the airline from February 1 because of serious deficiencies. They were given an opportunity to eliminate them in 3 months. The operation of the airline was still suspended by June 2020.

Touching upon the solution of these problems, Tatevik Revazyan noted that it is necessary to carry out a process of certification of the registered airlines again. However, according to her this is a difficult process. For that, it is necessary that the specialists of the committee undergo special trainings in order to conduct the certification properly.

It depends on the accuracy of the certification whether Armenia will leave the “EU Air Safety List” or not.

According to Revazyan, they applied to their European partners to support Armenia in training specialists. France, Romania and Spain have already given their consent. Their specialists will conduct joint trainings for the current Civil Aviation staff on how to conduct certification of airlines.

In general, the process of reorganization of the Committee, according to the assessments of its Chairman and the European partners, can take 2.5 years, if the pace of work remains the same. The Chairman of the Committee informed Prime Minister Nikol Pashinyan about this period while reporting the situation. According to her, Armenia can already apply for leaving the “EU Air Safety List” in November, 2022.

Which Companies Are Blacklisted and Why?

On June 2, 2020, the European Commission updated the “EU Air Safety List” adding all airlines certified in Armenia to the list. The list includes the airlines that are subject to an operating ban within the European Union. The reason of ban is that they do not meet the international safety standards. 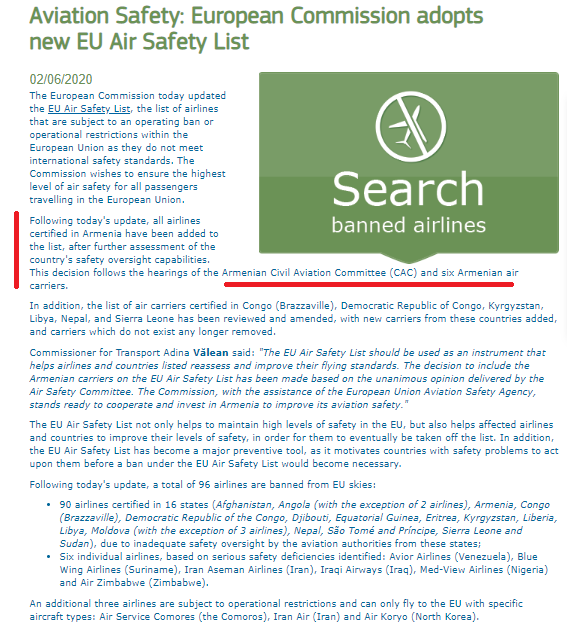 Thus, the airlines already registered or to be registered in Armenia in the future cannot make commercial flights to Europe as long as the ban is in force.

Thus, the airlines already registered or to be registered in Armenia in the future cannot make commercial flights to Europe as long as the ban is in force. 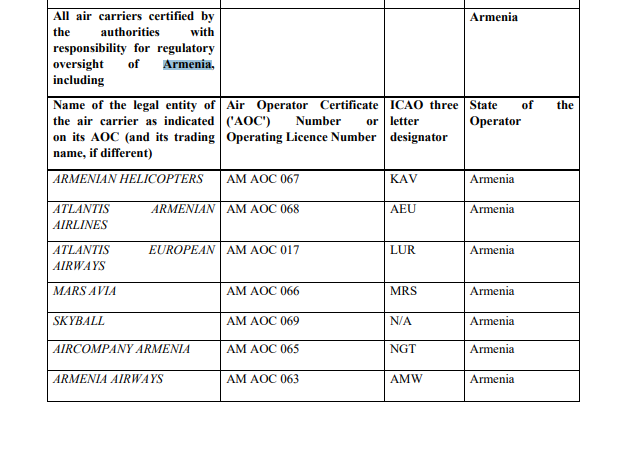 According to Civil Aviation Committee they cannot conduct commercial flights but this does not include flights performed for medical purposes, as well as for humanitarian or rescue purposes. For example, the Yerevan-Lyon-Yerevan humanitarian flight of Aircompany Armenia took place on June 2 for the citizens of Armenia and France.

By the way, it should be noted that before the ban, only two of the mentioned airlines, “Aircompany Armenia” and “Atlantis European Airways” had a permit to fly to Europe. Airlines registered in the Republic of Armenia mainly carry out air transportation in other directions. Moreover, according to the data provided by the Committee, only 12% of the flights of the above-mentioned two air carriers were performed to the EU in 2018-2020: France, Greece, Cyprus, Bulgaria, Spain, Italy. The main destinations of their flights were Russia (41%), Georgia (15%), Iran (14%).

Why don’t They Meet the Standards?

In considering the air safety, the European Commission will take into account the following safety standards:

The Air Safety List may be updated whenever the Commission deems it is necessary, or upon request of an EU Member State. The Air Safety Commission normally updates two or three times every year.

Referring to when the European Commission will review the status of the air carriers registered in Armenia, Tatevik Revazyan, the Chairman of the “Civil Aviation Committee”, mentioned the year of 2022. According to her, the Committee will be ready to perform its oversight functions by that time.

And before that, there are various international air carriers to fly from Armenia to Europe. The ban, of course, does not apply to them. 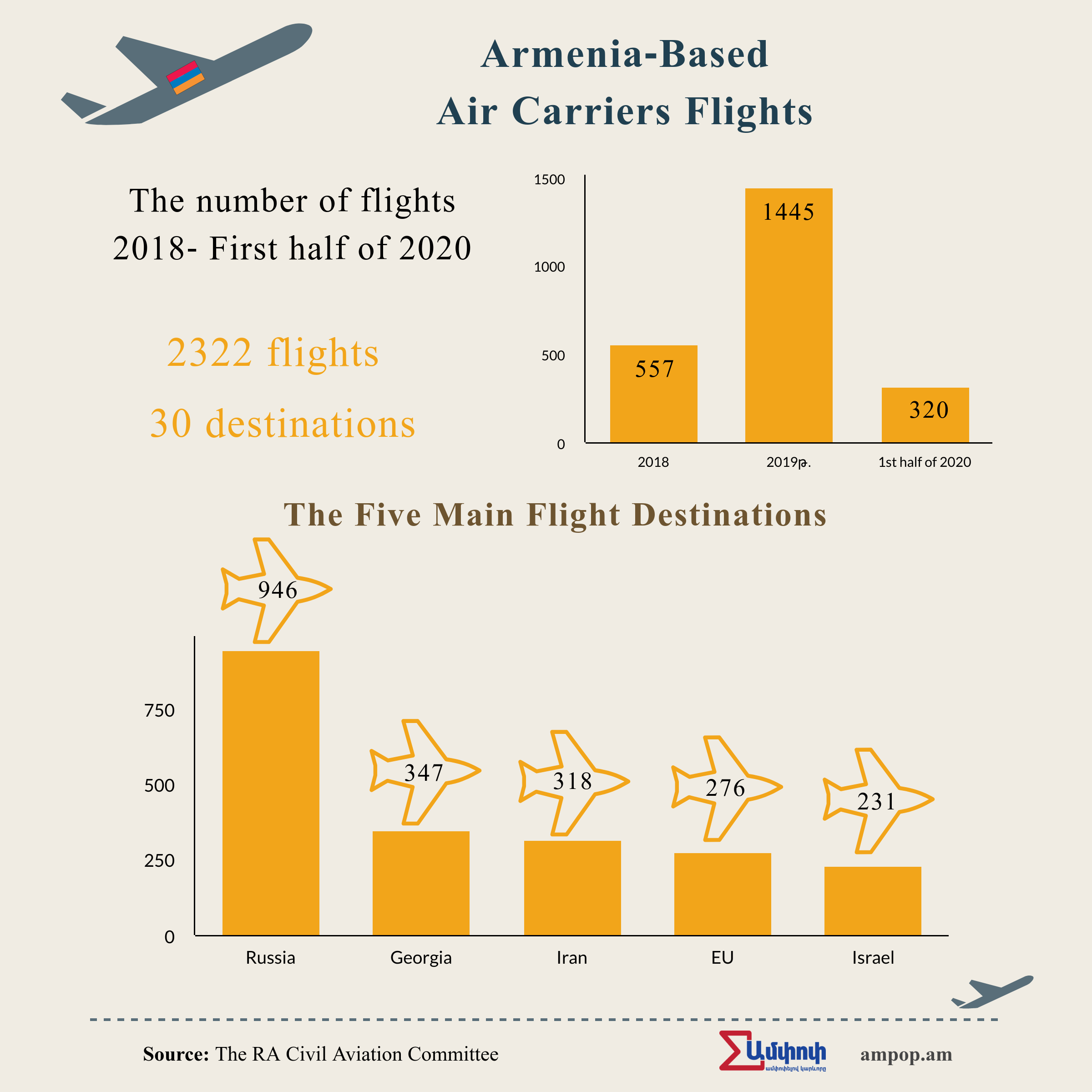 What was Going on in the Committee Before the Ban?

When learning the details of the criminal case directly related to the situation in the Civil Aviation Committee, which is currently being investigated by the RA General Prosecutor’s Office, it can be stated that the Committee had serious management and oversight issues, and it is difficult to say what the situation is now.

In any case, the fact is that three air carriers registered in Armenia yet in 2018 – “Taron Avia”, “Atlantis European Airways” and “Aircompany Armenia” applied to the European Aviation Safety Agency (EASA) for performing flights to the EU. However, due to the inspections of the representatives of the European Commission, serious flight safety problems were revealed in “Taron Avia”.

After that, the Civil Aviation Committee also carried out inspections and gave 6 months to “Taron Avia” to eliminate the problems. The latter stated that the problems could not be eliminated during the mentioned period, and preferred to suspend their activity.

The statement of the Prosecutor’s Office said that the auditors of the European Aviation Safety Agency had carried out inspections in both the Civil Aviation Committee and the airlines. 15 violations were found, 5 of which were quite serious. They informed the Committee in an official letter in July 2019 but the Committee staff member did not input the letter into the Mulberry’s electronic system and it was not processed properly. The Chairman of the Committee was communicated that there were no problems with the audit.

According to the statement of the Prosecutor’s Office, it turns out that the safety requirements of European auditors were not met, as a result of which Armenia appeared in the list of countries that do not meet EU air safety standards, despite the fact that two airlines have already received permission to fly to Europe.

Text and Infographics by Astghik Gevorgyan