The Asryans’ ancestral home was brought back to life three years ago. Uncle Arshavir’s grandson, Armen, returned to live there 30 years later, never being able to adjust to the city life.

Living in a rented house in Yerevan, Armen has been engaged in beekeeping for many years, he also had 30 species of birds. Armen’s love for bees and birds was passed on to his wife and children. And when Armen voiced about his wish to move from Yerevan to the village of Azokh in Artsakh (Nagorno-Karabakh Republic), his family members unanimously welcomed his intention. 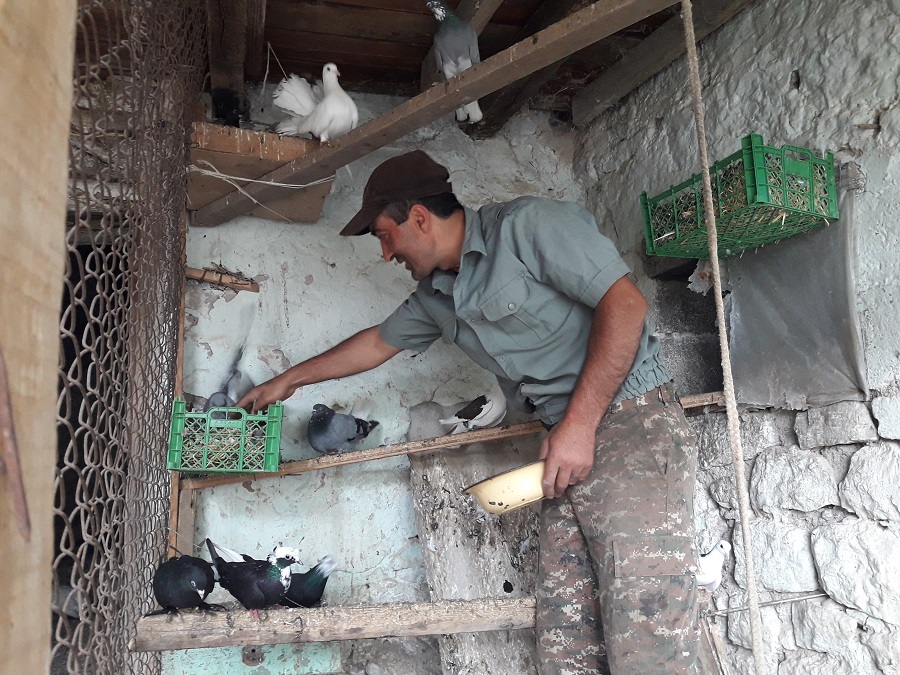 Return to the Ancestral Home

Armen has been interested in bees since childhood. He is convinced that he inherited it as his father’s uncle, later his aunt had also been engaged in beekeeping. He also joined the “beekeepers’ family” in the early 2000s. Having already the idea to keep bees, Armen took the bee pupa of his aunt with him to Yerevan and over the years, he increased the number of bee colonies to 150.

Over time, that number has decreased but the approach has not changed. In addition to his main job-blacksmithing, the smart insects have always been under Armen’s attention.

“Every year I took my bees out of Yerevan to Aparan, Dilijan, Yeghvard because those areas are favorable for bees, both in terms of climate and vegetation. I got at least 10-12 kg of honey from one bee colony. There were cases I took out up to 40 kg of honey from one full hive [edt. a two-story hive with a hull],” Armen told Ampop Media.

The areas where Armen’s bees temporarily settled in summers have now been turned into plantations. This fact also speeded up his move to the village.

Now, in the large yard of the grandfather’s house, the eight bee colonies brought from Yerevan are placed side by side, all of them are Carpathian Honey Bee. In the past, he also kept bees of other breeds: Carniolan honey bee, gray Caucasian bee. He says that the Carpathian bee is inferior to the latter in terms of honey production but it is frost-resistant and non-aggressive. 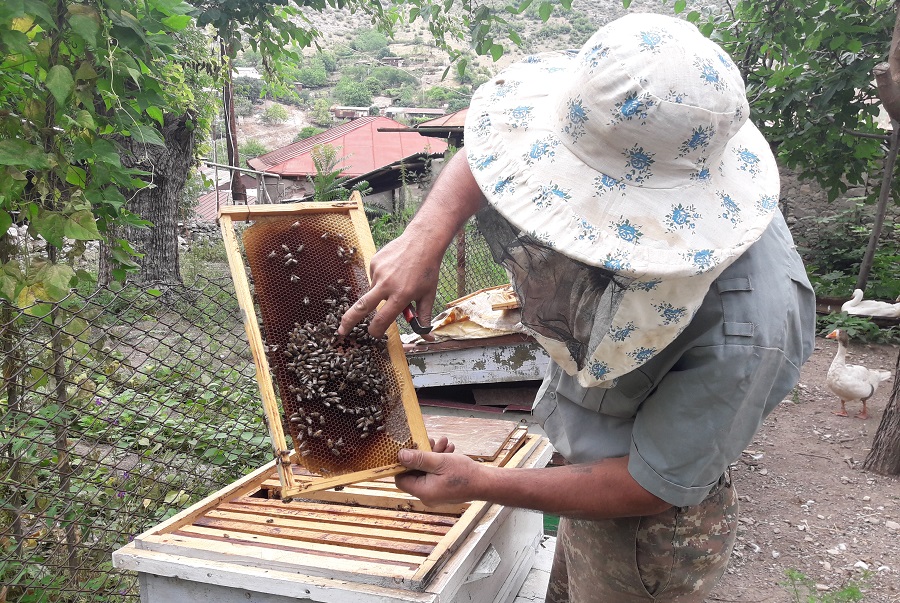 Following the Movement of Bees

According to Armen, the bees quickly adapted to the local weather conditions and quickly orientated when and where they could collect pollen.

Worker bees can fly up to 4 km a day to forage for pollen. Armen got convinced of that with the help of a sign made on bees.

How much honey the beekeeper will extract in August largely depends on the diligence of these insects but the weather conditions have no less effect.

For example, in the last two years, Armen has taken one or two frames from each hive, the rest is barely enough for the bees. The same quantity is expected this year.

“A bee works for 40-50 days on average and never comes back without pollen. And because it is exhausted as a result of working, the queen bee breeds with the same frequency – every 40-50 days,” says Armen, looking through the honeycombs of the first hive.

After a short silence, he explains that the new batch of bees is usually moved to another place because they will be too many for one bee colony, and it will be difficult to feed them.

It turns out that the nurse bee finds a suitable place for the pupae, where they are housed, headed by another newly selected queen bee. About 200 older bees accompany the pupae, carrying food and water for them in their esophagus.

“Newborn bees are not released immediately by the queen bee. They first learn to fly. When a swarm of bees dances in the air, it means that the elders teach the younger ones to fly,” Armen explains with a smile, adding that 4-5 days is enough for pupae to learn flying.

The Discipline of Bees as a Positive Example

Putting on the beekeeper’s hat and veil, Armen approaches the second of the hives arranged in a straight line. “When you open the hive, you must immediately understand what their demands are. A bee explains everything with signs.”

The first thing Armen did right after opening the hive was to cover his hands with the beeswax. And indeed, the anxiety of the “standing” bees disappeared as soon as they smelled their wax.

Armen is convinced that if the bee is given enough time and the weather conditions are favorable, it is possible to earn living for the family with the harvest received from 20-25 hives.

The beekeeper looks at things through the prism of a bee hive. He often draws parallels with bees when talking about different topics. And what surprises him the most is their discipline and organizational abilities.

“A bee colony of 40-50 thousand bees has one leader – the queen bee, and the others humbly work all day. And here in a small Armenia people assault each other and change leaders one after another.”

Armen prefers not to be engaged in talks about politics that occur in the streets of the village but he advises politicians to take their opinion into account by all means. 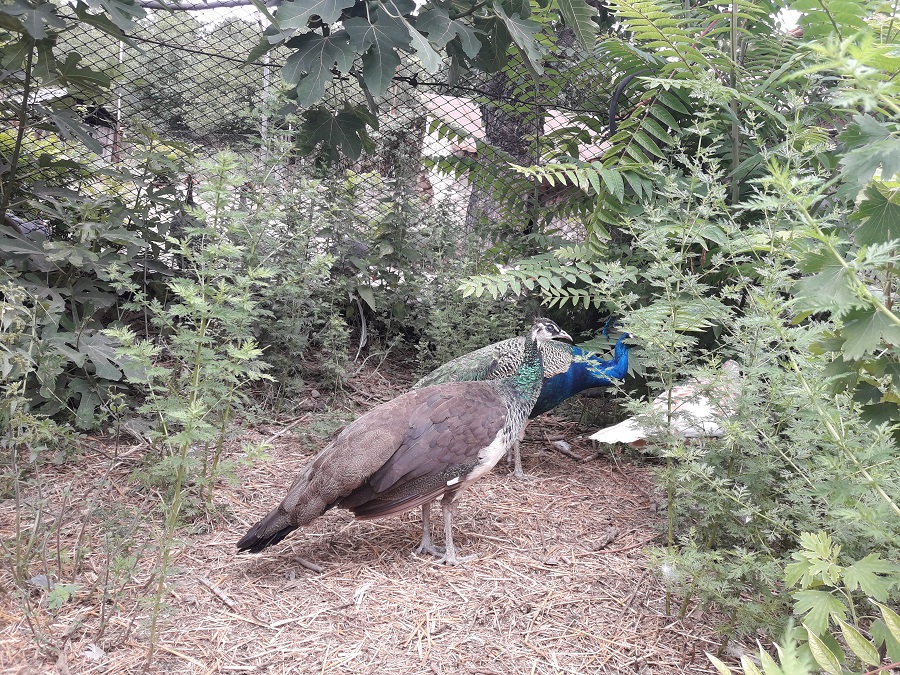 He also spends his spare time creating something, for example, building a nest for a partridge or a rabbit. There is not much spare time, however. Blacksmith’s services are much demanded in the village.

You will not find most of Armen’s birds in the yard of anyone else in the village. Partridge, silkie, pheasant, peafowl and etc. About 15 species of domestic and wild birds live side by side in the same yard. Other birds in Yerevan are left to the care of his friends. Only the ostrich will move to Azokh at the earliest opportunity.

Text and photos by Lilit Poghosyan

The Procedure for Providing Child Care Allowance in Rural Communities
Sports and COVID-19. Six Athletes from Armenia Take Part in the Olympic Games