According to the data of RA Prosecutor General’s Office, in the period from January, 2018 to May, 2019, criminal cases on corruption – related crimes were filed against 249 people.

During the above mentioned 17 months, charges were directed to people involved in social security, including RA specialists of territorial agencies of social assistance, inspectors, heads of departments, deputies, ministry employees and others.

The mentioned people were involved in giving fraudulent documents for illegal rewards in the field of disability benefits, plundering the amount of benefits and in other related crimes. And as a result, the damage inflicted on the state on the above crimes has been amounted to more than 770 mln Armenian drams (US$1.6mln), of which about 140 mln drams (US$291.666) have been reimbursed.

The amount of fee of honor will be doubled 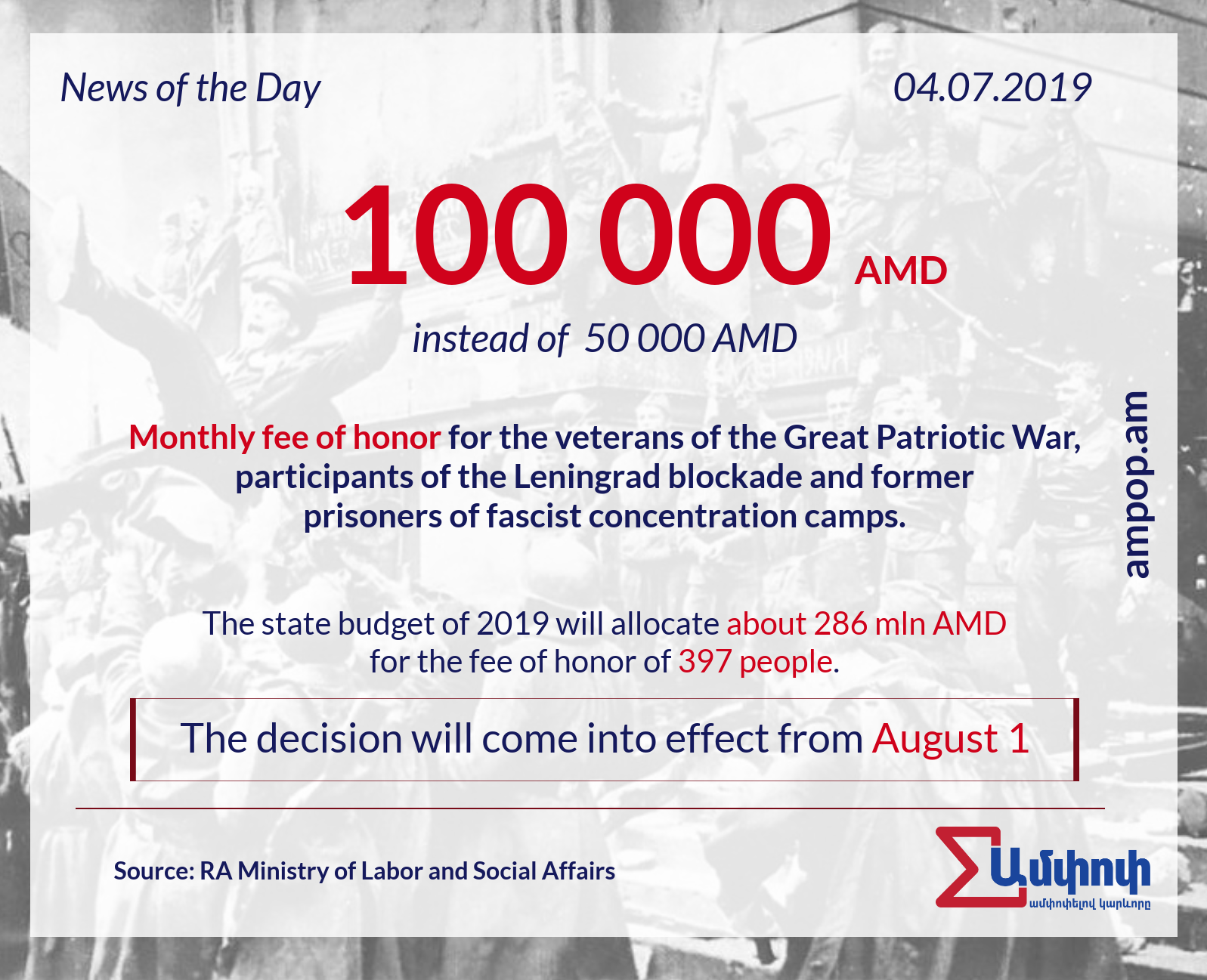 From Emergency Flats to New Ones

On July 4, 83 families of 4th grade emergency blocks of flats got new flats from Yerevan Municipality. 59 more families received decisions of Yerevan City Authorities on getting flats in a block being built. Until final resettlement the families living in the blocks with high emergency rate will be living in the flats rented by the Municipality. However, 19 families decided to remain in the emergency block for various reasons. Mayor of Yerevan Hayk Marutyan noted in the interview that some residents are expecting to get larger apartments and others refuse to move to a rented apartment.

Still last year, at the meeting with residents of emergency flats, city authorities informed that resettlement of 2 blocks of flats will be over in 2020.

Shift in Armenian Patriarchate of Constantinople

As a result of the elections, Bishop Sahak Marshalian has been elected Locum Tenens of the Armenian Patriarchate of Constantinople. Elections took place on July 4 with participation of 2 candidates. Mashalian got 13 votes in favor and the other candidate` Archbishop Aram Ateshian got 11 votes.

Since 2010, he has been in charge of the current patriarchal work of the Constantinople after the heavy illness of the Armenian Patriarch of Constantinople Archbishop Mutafian. The latter passed away in March, 2019 in Holy Savior Armenian Hospital in Istanbul after being unconscious for 11 years.

Most probably after these elections the Patriarchate will prepare for new Patriarch elections. The local Armenian community repeatedly demanded the election of a new Patriarch, but the Turkish authorities constantly rejected saying that a new Patriarch may be elected only when the current patriarch passes away.

Environmentalists alert that in the recent days some fragments of Lake Sevan got green colour, preliminary reason of which is considered to be the fact that an algae bloom has been recorded in the lake.

Specialists claim that in some parts of the lake neither swimming, nor water drinking is allowed. They assure that fish reproduction is in danger, as well. On 4 July, the members of SOS Sevan Initiative discussed the reasons for the “blooming” in Lake Sevan. The only way out was to gather proposals and transfer to the RA Government.

The RA Minister of the Environment Erik Grigoryan informed that green color of the lake will disappear within ten days. At the same time he noted that pollution of the lake has sharply increased because of adjacent restaurants, hotels and other structures, as well as by the population. “At current, the biggest problem connected with Sevan is the diagnosis: one must clearly find out which are those sources,”said Grigoryan.

The Government will allocate 284 mln drams (US$592.000) for the creation of engineering laboratories at Armenian schools. About 375 mln drams (US$781.000) will be allocated for the reconstruction of high schools and improvement of building conditions.

The Government will also repay the dept of water consumer companies which makes more than 4 mln drams (US$8300) gathered for years. According to the source, the dept came out as a result of former tax and other creditor liabilities. And because of it, accounts of those banks were banned which prevented from organizing the irritation season.

According to the data of Lori Regional Prosecutor’s Office, 119 cases of illegal tree felling  and forestry abuses were registered in Lori region in the first semester of 2019 and criminal cases have been instigated in terms of 49 cases. The extent of the damage caused to the state based on illegal tree felling has made up over 102 million AMD, out of which around 600,000 AMD or 0.6% has been recovered.