The number of applications to the Hman Rights Defender (HRD) during the last year as compared to that in 2017 has double increased. The complaint letters refer to the State bodies of RA, who do not reply to citizens’ requests properly. According to the HRD of RA Arman Tatoyan, the number of journalists’ requests, not getting a proper reply, has double increased, too. Tatoyan states, that this indicator is also connected with the events in April, 2018. Alongside with increase of political changes, the number of citizens’ applications has also increased, which in its turn effected the increase of complaints number.

The Case of March 1 submitted to the Court

The Prosecutor General’s Office of the RA approved the indictment against high-ranking state officials Robert Kocharyan, Seyran Ohanyan, Yuri Khachaturov and Armen Gevorkyan. The criminal case was submitted to the court. According to the accusatory indictments, the first three former officials are charged with overthrowing the constitutional order, and Armen Gevorkyan is charged with helping Robert Kocharyan to overthrow the constitutional order. Gevorkyan and Kocharyan are charged with taking bribes as well. Meanwhile, on May 3 Prosecutor General Artur Davtyan stated that testimonies on 10 victims of March 1 case are not sufficient and it is not possible to involve anyone as a defendant.

Application for depriving mandate of head of Prosperous Armenia Party

On April 29 “The Citizen’s Decision” party filed a petition to the President of the National Assembly Ararat Mirzoyan and the RA Prosecutor General Artur Davtyan with request for the initiation of a criminal prosecution against the head of PAP faction Gagik Tsarukyan and deprivation of his mandate in Parliament. The application runs, that Tsarukyan is obviously dealing with entrepreneurship which breaks the RA Law “On Public Service.” According to it the public servant or high-ranking official has no right to get engaged in business activity. In this regard, NA speaker Ararat Mirzoyan also addressed a writ to Gagik Tsarukyan. In the letter he urges the head of PAP to give exhaustive clarifications and supervise the deputy activity in order not to cause conflict of interests. 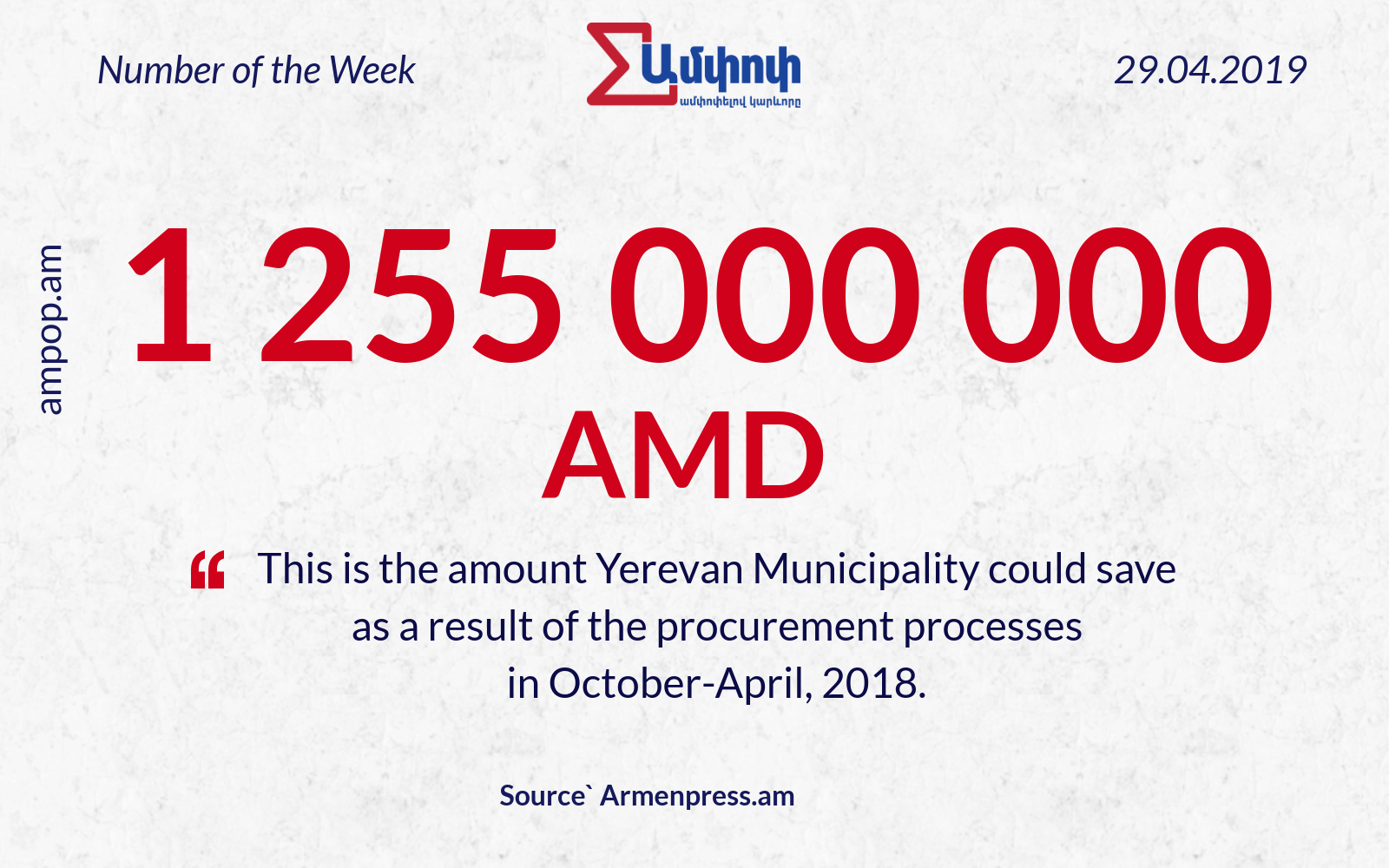 Yerevan Municipality paid “Sanitek” company 26 mln AMD money less for improper scavenging. 236 million AMD was allocated from the sector of city budget for the purchase of new garbage-collecting vehicles, which was envisaged for pre-school renovation. Mayor’s spokesperson Hakob Karapetyan explained this by the fact that 30% of kindergartens will be renovated with the help of international donors and the saved money may be directed to other spheres.

On May 2, the Government of RA made a decision according to which privileged loans (issued form 2002) to repressed people during soviet years and their heirs are pardoned. Loans were allocated to 303 citizens from the state budget with 1% interest rate annually and a 25-year maturity period for providing them with housing conditions. The project was represented by the Ministry of Labor and Social Affairs taking into account the fact that 19 borrowers redeemed the loan as of 2018, but the rest 114 creditors did not fulfill their credit obligations. The total amount of the loan is 1.2 bln AMD. The total amount of unredeemed loan is about 340 mln AMD.

The Republic of Armenia is going to get 13.4 bln AMD loan from the International Bank for Reconstruction and Development (IBRD). On May 2 the Government of RA approved this project of getting the loan for road construction. The goal of the project is to provide access of markets and services for rural communities. It is envisaged to improve the roads of vital importance with a total length of 61 km. Renovated roads are located in 6 regions of RA: Ararat, Armavir, Syunik, Gegharkunik, Lori and Aragatsotn.