Following Armenia’s Velvet Revolution of May 2018, the President of Armenia finds himself as Head of State in a country where the political forces that secured his election no longer prevail. Armen Sarkissian became President thanks to the constitutional maneuvers of outgoing President Serzh Sargsyan (no relation). Serzh Sargsyan, a member of the Republican Party of Armenia (RPA) had planned to become Prime Minister of the Republic, and had engineered a change in the constitution to give executive power to the position of Prime Minister–a role he sought for himself as a way of getting round the Presidential two-term limit. Public protests forced Serzh to resign the role of PM after just a few days in spring 2018. The new interim Prime Minister is revolutionary leader Nikol Pashinyan. For now, Sarkissian remains President and the constitutional changes implemented by Serzh and Republican Party still stand. This article examines the new role of President, the election of Sarkissian and outlines his political background. No-one knows what will happen next.

Sarkissian is the 4th President and has a seven-year term lasting until 2025. A lot has changed in Armenia since April 9. We provide insight into the circumstances that made Sarkissian President, and his current Constitutional role.

In December 2015, Armenia’s National Assembly adopted bills submitted by the (then) majority Republican Party of Armenia (RPA) Government which changed the Republic’s Constitution. Power was shifted from the role of President, to the role of Prime Minister. Under the current constitution of Armenia, the President’s role is now largely ceremonial.

Public unhappiness with the politics behind this constitutional change eventually led to the Velvet Revolution of  spring 2018 (you can read about those events here) and a completely new Prime Minister for Armenia—Nikol Pashinyan. But President Sarkissian (who is no relation to the former President Serzh Sargsyan) is still President and, at least for now, the constitution adopted in December 2015 still stands. 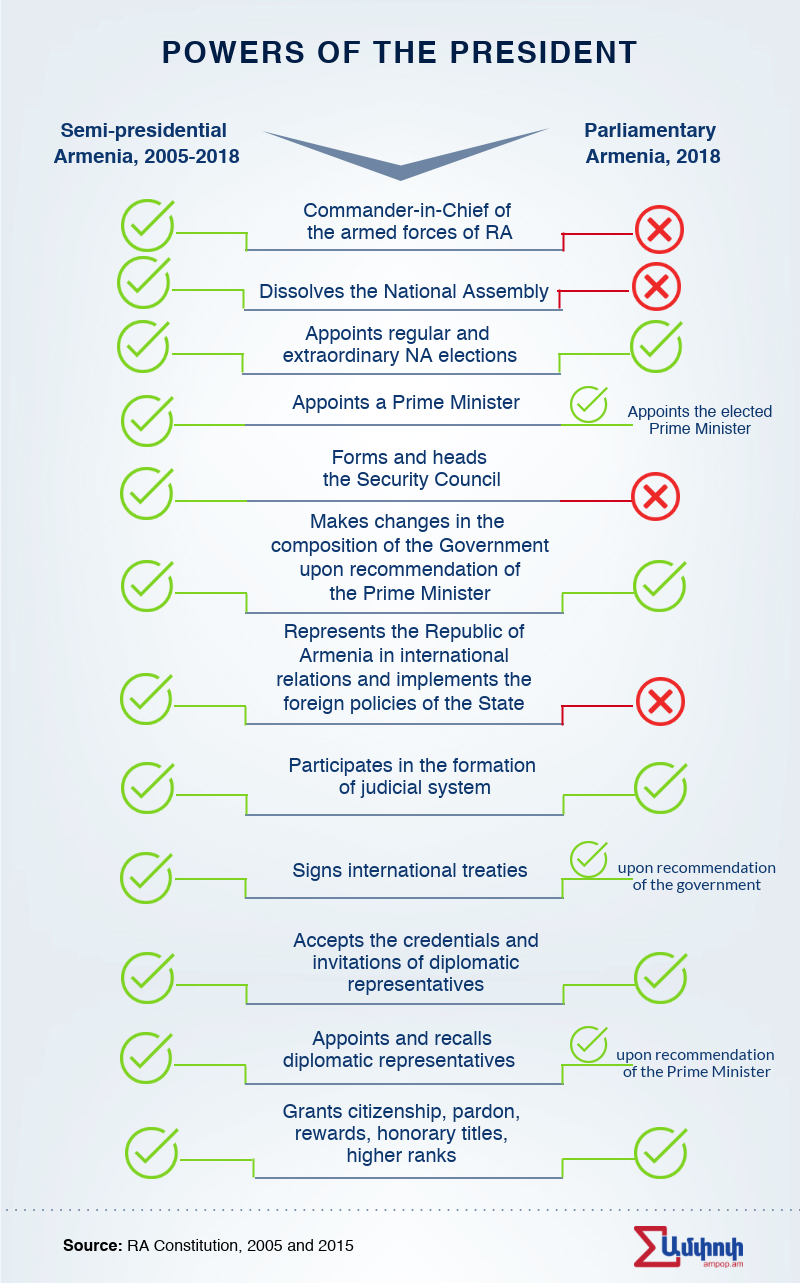 What is the current role of the President?

Armenia now has a parliamentary system of government, with most of the previous powers of the President now accorded to the Prime Minister.

For example, following the Constitutional change, the President of Armenia is no longer involved in the formation and activities of the Security Council, which runs the Republic’s national defense. Also, according to the law “On the State Government Bodies”, the National Security, State Protection and State Supervision Services and Police are now directly subordinated to the Prime Minister.

At the time of the constitutional change, addresses also changed. The former office of Armenia’s President at Baghramyan 26 became the office intended for the Prime Minister. Thus President Sarkissian now runs his office at Government Reception House at 47 Mashtots Avenue.

How did Armen Sarkissian become President?

Twenty-five percent of members of the National Assembly must support a Presidential candidate in order for that person to secure the nomination.

Armen Sarkissian, formerly Armenia’s ambassador to the United Kingdom, was nominated by then-incumbent President Serzh Sargsyan for the role of President. He was the only nominee.

The Yelk faction (with 9 members at that time), the party of the now Prime Minister Nikol Pashinyan, the architect of the Velvet Revolution, had hoped to nominate a candidate, but could only muster 9 votes of the required 27.

Тo become President of Armenia, Sarkissian had to receive at least 79 votes from 105. The votes of the coalition partners of Republican Party and Armenian Revolutionary Federation factions and the Tsarukyan faction total 96, which was enough to elect Sarkissian. “Yelk” faction voted against his candidacy.

On April 21, 2018, within three weeks of Sarkissian’s appointment, when the revolutionary movement demanding the resignation of the newly elected Prime Minister Serzh Sargsyan was in full swing, the President initiated a meeting between himself and the leader of the revolutionary movement Nikol Pashinyan aimed to arrange a meeting between Serzh Sargsyan and Nikol Pashinyan. The meeting between Serzh and Nikol though happened the next morning, April 22 but was overthrown. On April 23 Serzh Sargsyan had resigned. He had been Prime Minister for only 6 days. In the following days, President Armen Sarkissian launched a series of meetings with representatives of the parliamentary and extra-parliamentary forces, urging the situation to be resolved through constitutional and peaceful means.

Despite the fact that Armen Sarkissian was nominated as presidential candidate by Serzh Sargsyan’s and by the (then) ruling Republican Party, Nikol Pashinyan and his team did not demand the president’s resignation once Pashinyan became Prime Minister on May 9, 2018. This despite the fact that Nikol Pashinyan’s faction voted against Armen Sarkissian’s presidency, saying that he was elected in violation of the Constitution.

The President appointed Nikol Pashinyan as Prime Minister following the National Assembly’s vote to elect him.

President Sarkissian is now head of state working with a Prime Minister who only months ago opposed his election to the Presidency.

Who is Armen Sarkissian?

65-year-old Armen Sarkissian was Armenian ambassador to the United Kingdom in 1991-95, 1998-99 and 2013-2018. In 1996-97 he was also the Prime Minister of Armenia. At that time, the press reported he resigned because of health issues. Armen Sarkissian is also known as a businessman with extensive business contacts. His name is also linked to the British company Lydian International Limited, whose daughter company Lydian Armenia is implementing the Amulsar gold mine project in Vayots Dzor which has proved very controversial because of public concerns about environmental damage.  However, in an interview with “Shant” TV company on January 30, 2018 Armen Sarkissian stated that he has never been a shareholder of this company, but has provided consulting services to this company 5 years ago, being a member of the Advisory Board of Directors. 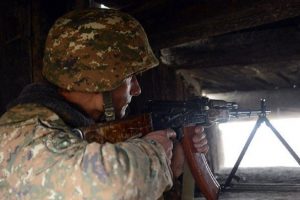 What is Happening in Armenia? Civic Protests Against Former President Serzh Sargsyan as Candidate For Prime Minister