As Hurghada-Yerevan flight of July 25 was cancelled, return of more than 100 RA citizens, on rest in Egypt, became uncertain. According to the Embassy of Armenia to Egypt, the flight was cancelled because of tour operator’s failure to pay fees to the airlines.

RA Government urgently responded to the occurred problem by paying 47.2 mln drams (about US$99.000) to restore the Hurghada-Yerevan flight. The citizens in Egypt returned to Armenia on July 26.

One more flight will be implemented by funding of RA Government on July 29 only for those tourists who had traveled Egypt by Armenian “A&R tour” travel company packages. The Embassy of Armenia to Egypt calls on to cancel their vacation and return by the flight.

Hripsime Stambulyan, director of “Anriva Tour” company, the authorized representative of Egypian Air Cairo airline, states that according to preliminary data, about 400 RA citizens damaged because of A&R tour operator’s failure. “The word is about those who had not flied, those who could not return and about the people whose vacation will end over these days.”

Representatives of “A&R tour” have not made any statements.

On July 25 the European Court of Human Rights (ECHR) issued a judgement in the case of Vardanyan and Nanushyan v. Armenia according to which Armenia should pay 1.608.000 euros to the RA citizen, 83-year-old Yuri Vardanyan.

Vardanyan’s flat, which was located at Byuzand street in Yerevan until 2002, was recognized as a supreme interest by the state. As compensation for that flat Vardanyan was offered 54 mln drams (about US$ 113.000) which is almost five times less than the real price. ECHR verdict runs that rights of fair trial and property were violated. ECHR has also noted that behaviour of the president of the Court of Cassation had not been impartial during the trial. 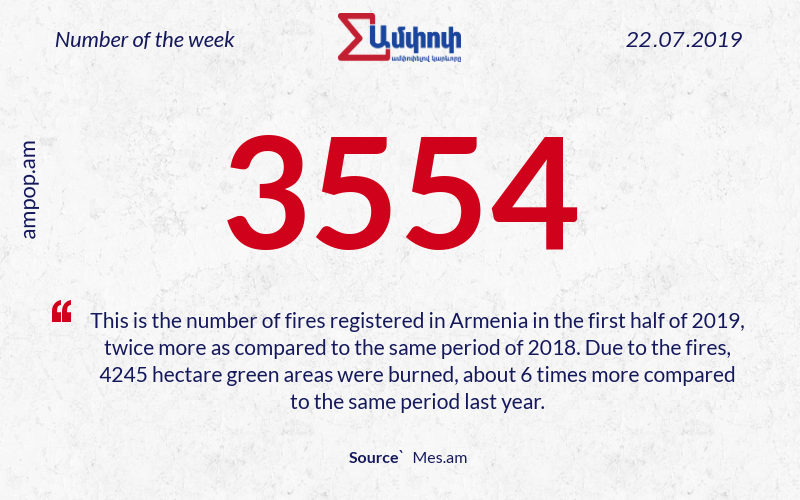 RA Government allocated 261.4 mln drams (more than US$ 547.000) to the Ministry of Emergency Situations (MES) to solve problems resulted from unprecedented number of fires. Besides, a number of equipment and goods will be purchased from one and the same entity without competition.

The Government will also allocate 450.5 mln drams (more than US$ 943.000) to the Water Committee to improve water supply infrastructure.

Prosecutor’s Office states:  Cafes near Opera have been illegally situated

Cafes placed near the Opera House adjacent to Yerevan’s Freedom Square are illegally placed. RA Prosecutor General’s Office has issued this statement, noting that a criminal case has been initiated. It also states that 2002-2018 cafes opened due to abuse of Officials’ authorities of Yerevan Municipality, Historical and Cultural Monuments Protection Agency [at Ministry of Culture of Armenia] and the State Committee of Real Property

During March of this year 3 out of 5 cafes near the Opera House were dismantled, and Yerevan Municipality applied to the Court to get the legal grounds for dismantling the other two as well.

Total number of crimes has increased by 9%

In the first half of 2019, total number of crimes in Armenia has increased by 9%. Main cases of crime are theft and traffic violations. Reports on crime have also increased by 16%. This is stated by Chief of Police Valeri Osipyan at press conference of July 24.

RA Ministry of Labor and Social Affairs has initiated a new program called “Social Ambulance”. Goal of the program is to unite people and organizations’ resources and provide more targeted assistance to those who are in a difficult situation and need help.

To take part in the program, citizens should join the youth bank registering with the following link and suggest their own assistance in the form of psychological and advocacy help, food and clothes, housing or parental care.