On June 7, at first reading the National Assembly adopted the draft law “On Making Amendments and Addenda to the Tax Code of the Republic of Armenia” presented by the Government.

The bill was approved by the Government in March and was sent to the National Assembly. Anyhow, this document has been a subject of hot debates during both parliamentary hearings and extra-parliamentary sessions since the beginning of the year.

It means the income tax will make 23% for everybody irrespective of the salary. If the bill is adopted, it will come into force from January 1, 2020.

With the same bill, the profit tax is being reduced by 2%, becoming 18% (profit tax is a direct tax to be paid to the state budget by the taxpayers in accordance with the defined procedure and amount, once a year).

The current Code envisages a three-stage progressive taxation. That is, the income tax is growing parallel to the increase of salaries. People with up to 150.000 drams salary pay 23% income tax, people with 150.000-2 mln drams pay 28%, and those with more than 2 mln drmas -36%.

Opponents of the transition from progressive taxation into flat-scale one claim, that by this step the tax burden is transferred from the rich minority to the poor majority. 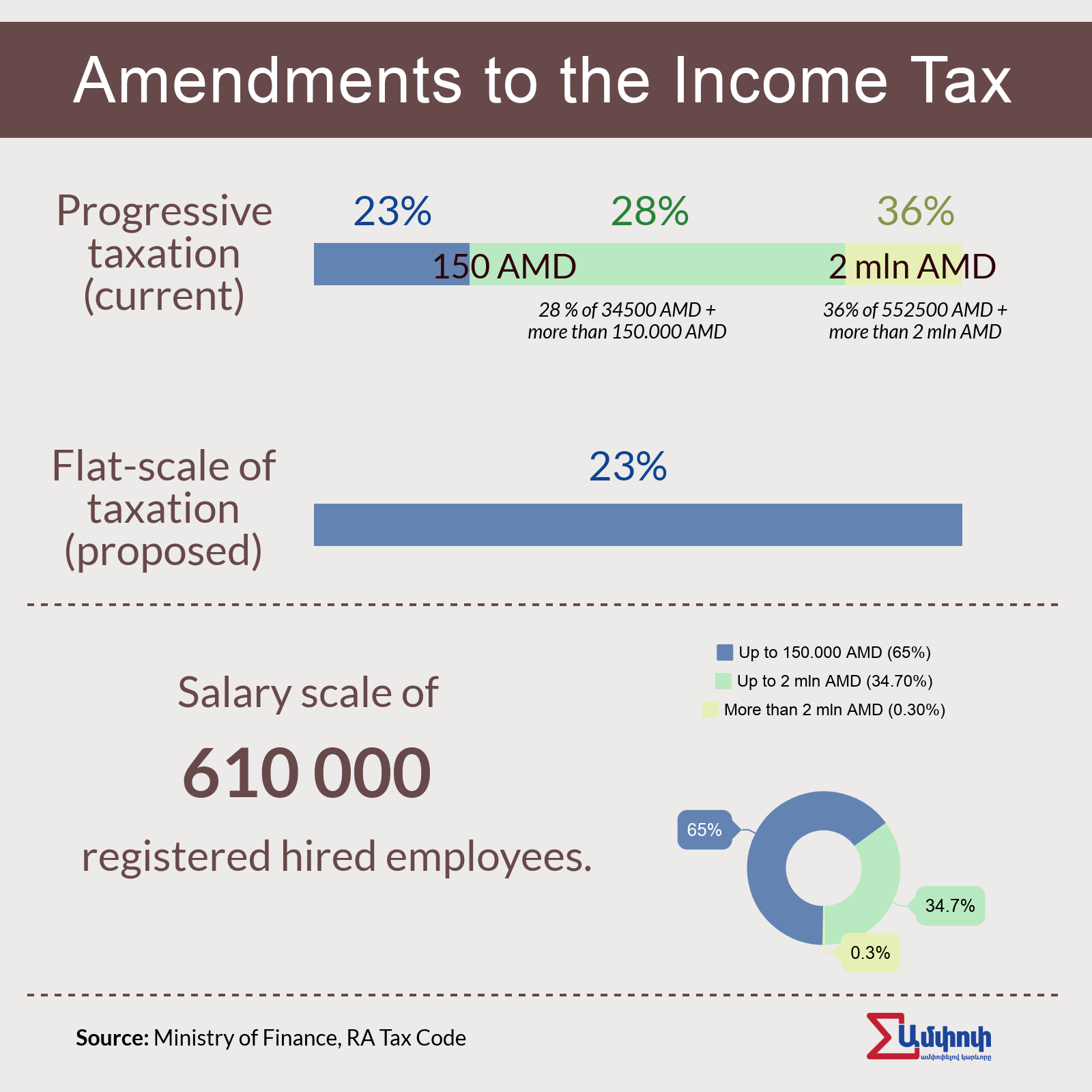 Groundings for the Transition of Flat-scale of Taxation

At the same time, Atom Janjughazyan, RA Minister of Finance states, that there will be income decrease of 27 mln drams in the state budget, and this amount will increase in the coming years.

To neutralize the losses the excise tax is going to raise, particularly for tobacco products and alcoholic drinks. Arman Poghosyan, RA Deputy Minister of Finance notes that the list of mentioned products will increase.

Groundings against the Transition of Flat-scale of Taxation

Economist Movses Aristakesyan notes that by the transition into flat-scale of taxation the Government will break at least two articles of the Constitution.

“Social justice is being broken and discrimination arises based on the size of the property. Usage of this kind of taxation will lead to the income reduction of the employees with less salary and to the increase of employees with high salary,”states Aristakesyan in the intervieww with “Ampop Media.”

At current, 65% of the registered employees get up to 150.000 drams salary and pay 23% income tax, so flat-scale of taxation of 23% will have no impact on them. Employees with less than 200.000 drams salary will not feel any significant ease, either.

According to economist Aristakesyan, tax burden for this group of people will not ease and they will come across the inflation which will come out as a result of the rise in excise tax.

People getting 2 more than 2 mln drams salary will feel a significant ease in the taxation. Now their income tax makes 36%. According to the Ministry of Finance, this group of people make 0.3% of the total labor market.

“If now the difference between employees with up to 150.000 drams salary and those with more than 2 mln drams makes 15 times, then in case of flat-scale of taxation, it will make 32 times. In other words, the condition of people with less salary will double downsize,”says the economist.

The first Tax Code of RA was adopted in October, 2016, before that since 1997, the RA law “On Taxes” had been in use. The current Code came into force in 2017-2018yy. Public discussions of the amendments to the Tax Code launched after the fact that PM Nikol Pashinyan in September, 2018 announced about the intention to make amendments to the taxation.

In response to the criticisms, according to which flat-scale of taxation will lead to a greater social inequality, Pashinyan replied: “We are going to solve the problem of social balance by introducing a new system of property tax. We can record that no one in RA has become rich only with salary.” 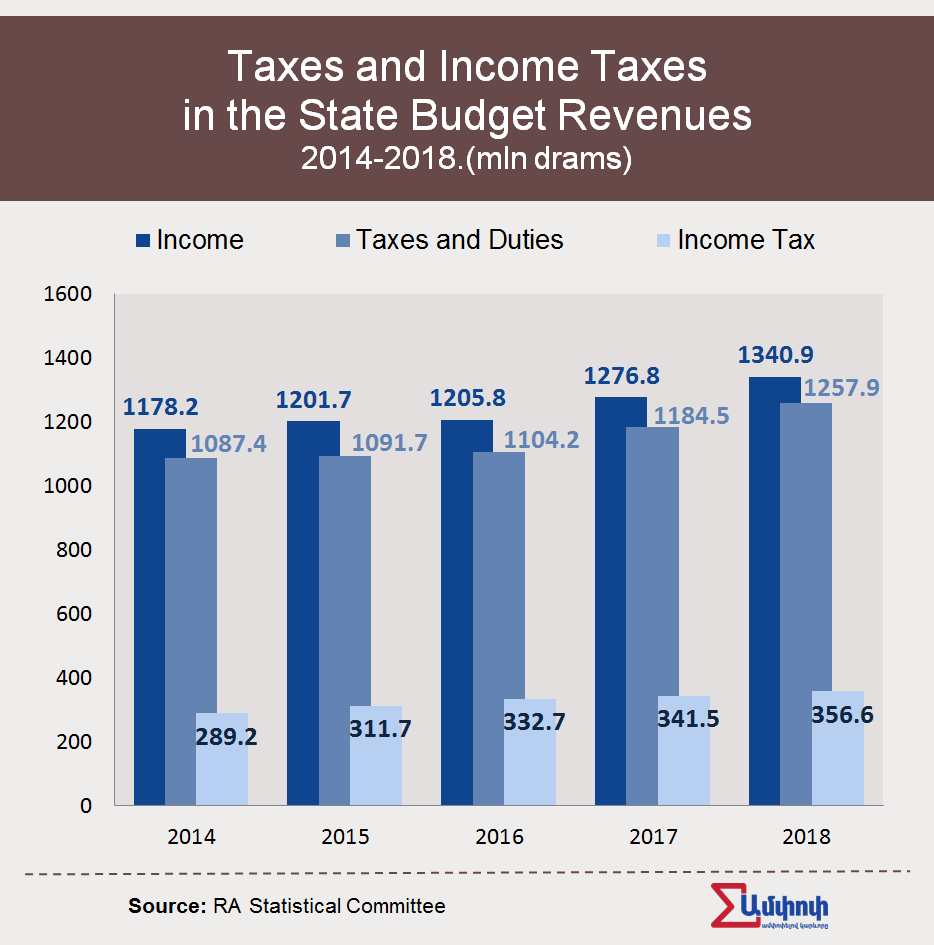 Taxes and GDP in Armenia

Most of the state budget is formed by taxes and duties. Influence of tax revenues on the economy may be seen via the indicator of tax/GDP. This correlation shows which part (%) of the GDP make the collected taxes in the current year. E.g. the tax/GDP correlation of RA made 20.3% in 2018, and by the budget of 2019 it is envisaged to make 20.7%.

The budget of 2019 is going to collect 11% more taxes: tax revenues and state duties will make 1 trillion 399 bln drams.

And again Arguments for and against Flat-scale of Taxation

Deputy Minister Poghosyan says progressive taxation requires complex calculations, a complex taxation mechanism, while flat-scale of taxation will set more simple mechanisms. In his opinion, Armenia will pass to progressive taxation in a few years and will make steps in this direction. Before that, some time is required to develop more favorable calculations. According to him, the term of flat-scale of taxation will exactly be that period of time.

While Aristakesyan does not consider this clarification to be valid. According to him, calculations of progressive taxation are not so difficult and the current electronic calculators count the amount of taxation themselves. Moreover, progressive taxation is preferable for the development of the economy, which provides justice and does not promote discrimination.

At the international conference “Taxation, Justice and Economic Development” held in Yerevan in February, the Minister of Finance of the Republic of North Macedonia Dragan Tevdovski noted that the purpose of his participation in the discussion is to present both positive and negative aspects of the two systems.

Transition into flat-scale of taxation was made in Macednia in 2007. According to the Minister Tevdovski, the reasoning is that this system is used in many European countries, and this way the calculation is easier. Tevdovski says that flat-scale of taxation should also contribute to the growth in GDP. However, in twelve years the country passed to progressive taxation again.

Tevdovsky notes that Macedonia has become the country with the highest inequality in Europe during these years.

“We are passing back to progressive taxation with the aim of forming more revenues for the state budget, which can be addressed to the development of education, healthcare and other spheres,” he said.

Other European countries such as Czech Republic, Slovakia, Albania, Latvia and so on made transitions from progressive taxation into flat-scale one and the opposite.

Senior advisor to the Minister of Finance of Slovak Republic Anton Marcinčin also participated in the conference. The latter informed that Slovakia passed to flat-scale of taxation with 19% in 2004, but in 9 years again returned to progressive taxation. Marcinčin notes, that after the transition into progressive taxation, in 2013-2015yy state budget revenues increased from 34% GDP reaching to 40%.