The Government of the Republic of Armenia is making large-scale configurations in the inner structure reducing the number of ministries from 17 to 12. As a result of the process, several ministries merge into one and their functions and powers are being redistributed.

Changes will lead to optimization of the employees in the system, the number of which may reach several hundreds. However, authors of the initiative assure that the changes will take place within some months. So this fact allows the employees to find another job. The amendments will be implemented on the basis of making amendments on the RA law “On the Government Structure and Functioning.” The draft law package passed the governmental first reading in the National Assembly on April 16.

What is the aim of such large-scale amendments developed by the Office of Prime Minister of the Republic of Armenia? The pre-election program of “My Step” alliance meant for December 2018 snap parliamentary elections reported that existence of 17 Ministries is an “unjustified luxury” for the Republic of Armenia and it is an “unreasonable and heavy burden on taxpayers.”

“Ampop Media” having examined amendments on the above mentioned law, represents what will change in the Government structure and how it will affect on the Public Administration System.

Effect of Amendments on State Budget

The amendments package reports that it is impossible to assess the impact of these amendments on the income and expenses of the State Budget of the Republic of Armenia. The grounding is that it is still unclear to what extent the number of Government employees will change.

In this respect RA Prime Minister said: “the essence of Government’s configurations is not to spare money; it is far more important to raise the effectiveness of public administration bodies. This is the only goal that is worth the formulation.”

It is noted in the document that at the initial phase of reformulation process merging Ministries will move to newly formulating Ministry with their entire staff. Only the listed posts in the infographic will be optimized. 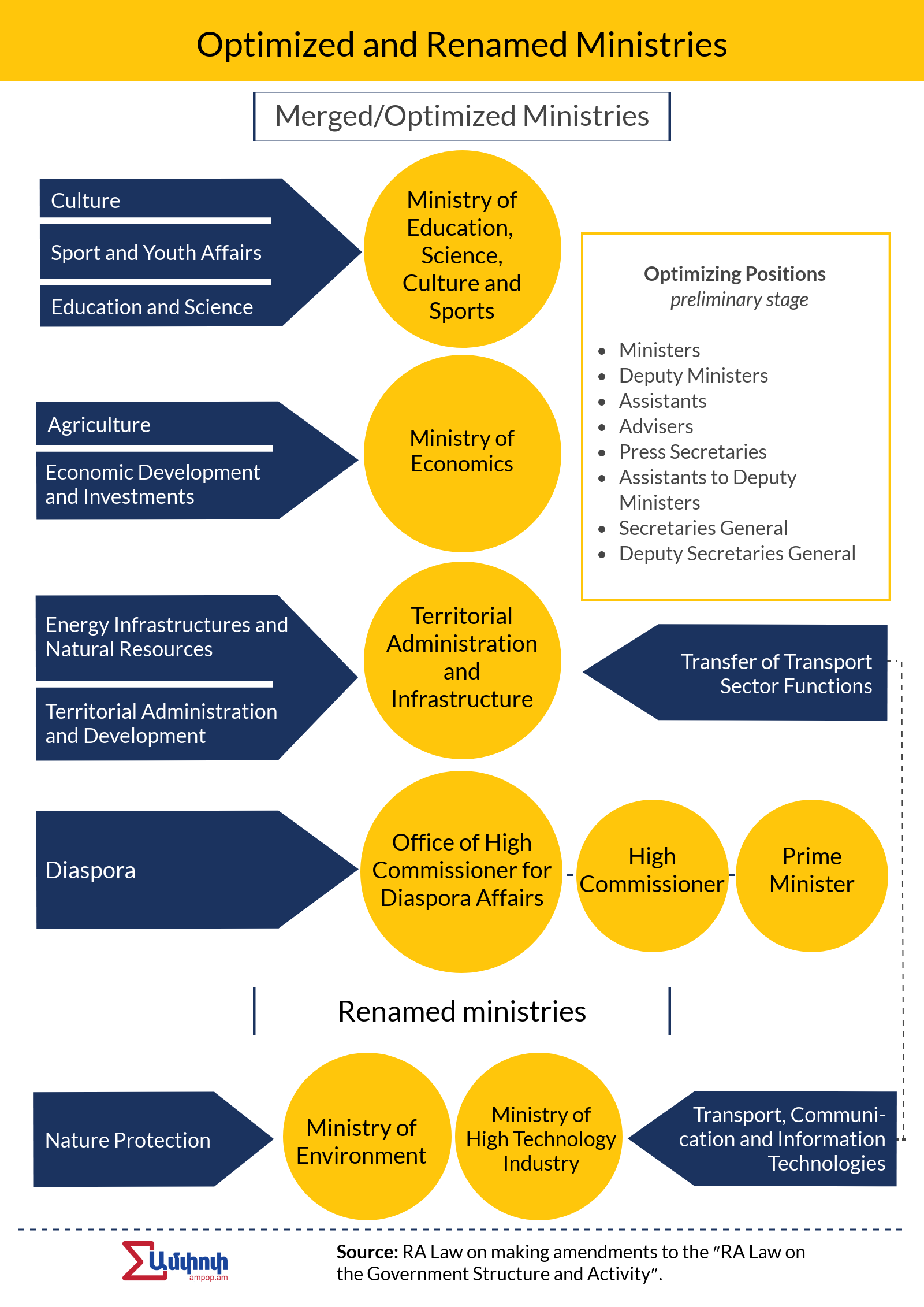 Ministry of Diaspora, which has been working for 11 years, will unite with the office of the Prime Minister as Post of High Commissioner for Diaspora Affairs with 20-25 employees instead of former 93.

At one of his speeches PM Pashinyan stated that main optimizations will concern the employees whose posts already exist in other ministries. “None of unique posts will be optimized and employees of these posts will get an opportunity to prove that they are ready to work under new conditions with new standards,” said Pashinyan.

Civil servants of optimizing Ministries will get an equal or lower post, the latter-at their disposal. If the civil servant does not agree with his newly appointed post, he is being registered in the personnel reserve according to his application. Prime Minister suggested to setting up training centers for the optimized employees wishing to get re-qualified.

According to the head of Armenian Union of Economists Gurgen Aslanyan, job management of state system has many pending issues.

“If there are three positions for one and the same job, then none of the three employees are eager to work seeing the other two do nothing.Yet the salary is equally the same for each of them. However there could have been only one employee with having three times higher salary,”said Aslanyan.

He is hopeful that as a result of the Government structure optimization the effectiveness of Public Administration System will increase, though, according to him, the number of Ministries has nothing to do with the functional efficiency. “Optimization of the number of Ministries and their powers may have positive results on the basis of economized expenses, increased salaries and reduced corruption risks”. 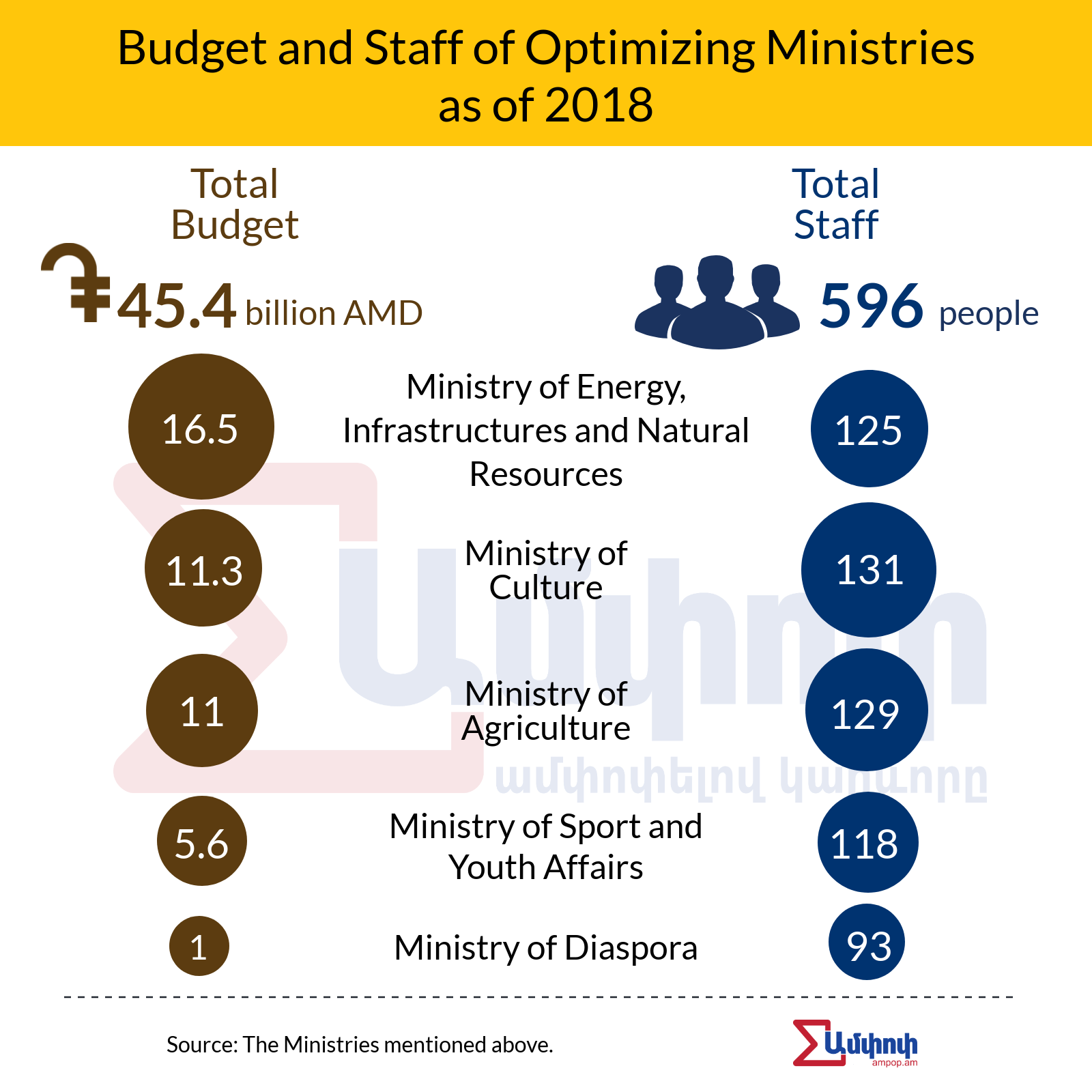 Management expert Serob Antinyan is not convinced that structural configurations of the Government will lead to the desired results. The consequences of the optimization of Ministries is unpredictable, as they have quite different strategic directions.

The expert does not put under suspicion the fact that repetitive functions of the Ministries should be excluded to get the effectiveness underlining that these functions should have been found out before initiating the process of reforms.

PIOs and SNCOs are also in the hot point

According to the data of the Ministry of Finance 2018, 9 Project Implementation Units (PIO) operated in the Government with 236 employees. The cost of their maintenance made 1 billion 694 million AMD.

According to PM Pashinyan, PIOs and SNCOs (State Non-Commercial Organization) are “hot points for corruption and places for public funds wasting,” so their issue is also a matter of agenda for the Government.

It is still unclear how PIOs and SNCOs will be optimized. However the process initiated. According to the Government decision of January 10, “Youth Event Holding Center” SNCO, a part of Ministry of Sport and Youth Affairs, liquidated. According to the Government decision of March 29, “Directorate for Automobile Roads of Armenia” SNCO liquidated, too. In case of both SNCOs, their funstions will be carried out by the Ministries, and annually allocated funds to them will be economized.

Hermine Karapetyan, one of the employees of “Youth Studies Institute”, which was a part of SNCO, has a reason for concern, as most of her workmates have become unemployed because of SNCO liquidation. “Optimization should have been carried out by taking into account the existing resources, which has not been done. This is also indicated by the fact that no coordinating structure is envisaged in the amendments program to the Government Structure of RA,”says Karapetyan. The process of PIOs and SNCOs optimization initiated still during the former Government headed by Prime Minister Karen Karapetyan. That time 5 PIOSs and 17 SNCOs were already optimized.

During the proceeding years of Independence of the Republic of Armenia, the number of Ministries changed alongside with almost every new Government: some of them periodically united and separated, some were renamed, and some of them remained permanent since 1991. Ministries of Defense, Foreign Affairs, Health and Justice belong to the latter category. From these Ministries, the Ministry of Foreign Affairs had the least number of Ministers during 28 years-6 Ministers. In addition, the longest-serving Ministers, Vartan Oskanian and Edward Nalbandian headed the Foreign Ministry for 10 years.

Since 1991 till now the Ministry of Agriculture has been headed by 15 Ministers, which is the largest number among all the Ministries. The Minister of Education and Science was also changed for 15 times, but in this case Levon Mkrtchyan was appointed to the post for 4 times at different periods of time. 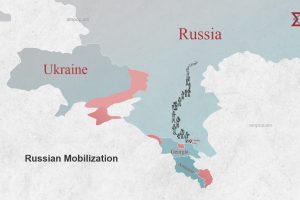