According to approximate estimates, there are 613 mines in Armenia worth $170 bln, with 60 types of minerals. Armenia holds 5.1% of the world’s total molybdenum reserves, though the main metals extracted are copper and gold. Molybdenum is less than 1% of the total production volume.

Although mining is an important sector of the RA economy, it is developing without a long-term sustainable use of resources, taxation, proper environmental legislation and environmental and social impact assessment.

Thousands of hectares of the state territory are covered with open mines and tailings dumps. Lands of industry, entrails-use and other production have increased by about ten thousand hectares or 30% over the last ten years, from 29,360 ha in 2009 to 38,400 ha in 2018.
The mines are mainly concentrated in the province of Lori – Alaverdi and Teghout, province of Syunik – in Kapan-Kajaran. And there are operating mines in almost all regions. 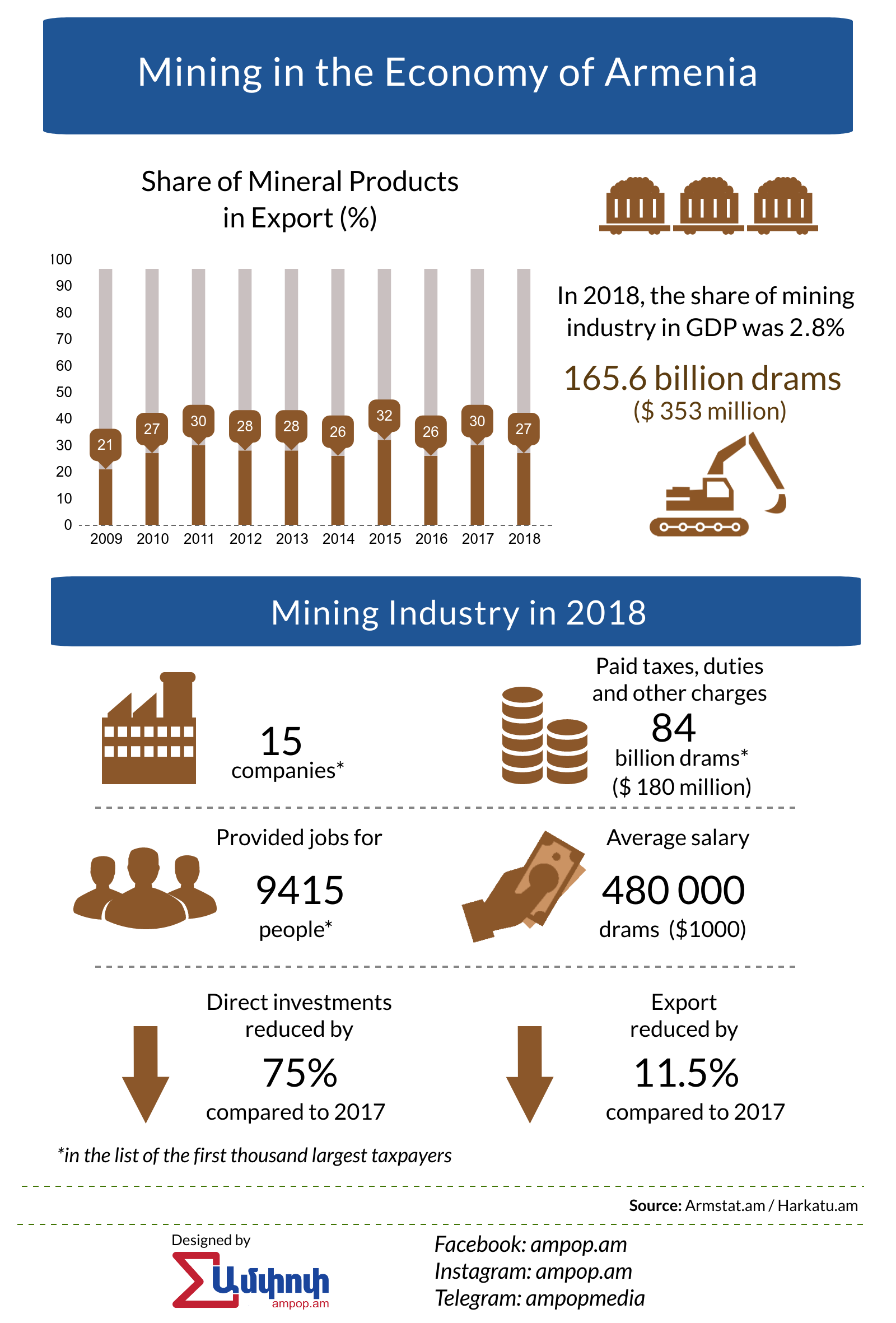 Despite the economic benefits, mining can also have long-term adverse effects.

Open pit mines have a negative impact not only on biodiversity but also on the well-being and health of the population. The operation of open mines pollutes the soil, water, air, and eliminates plants and animals in the area. And the population is aggravated by diseases, shrinkage of land area, decrease in the size of agricultural production, decline in incomes.

The exploitation of open-pit mines in forest areas is of particular concern, a striking example of which is the opening of a copper-molybdenum mine in Teghut. Prior to the exploitation of the mine, the forest near Teghut was the best preserved in Armenia with rich biodiversity.

The other alarming issue for mining and ore processing plants is tailing dumps. In many areas of the country, soil and water contamination from tailings dumps significantly exceeds permitted levels.

There are a number of problems with the operation and design of tailings dams in Armenia.

The main thing is that the tailings dams are built with the upstream raise design, in a seismically active country like Armenia. And international experience finds it unacceptable to build tailings dams in such a way in seismically unsafe territory, as the risk of collapse is high. Vivid example is again the Teghut mine tailing dump. It is built in an 8-point seismic zone with the upstream raise design. Although the floor is lined, the contaminated water can leak from the top to the underside and interfere with groundwater.

Another important issue is to ensure that tailings dumps are closed after mining. And in the case of tailings dumps from the past, it is necessary to assess the risk and process the accumulations. None of these approaches prevails in Armenia today. Moreover, as of the first half of 2019, the environmental protection fund amounted to 1.7 billion drams (about $3.6 million) for the closure and reclamation of the mine, which is insufficient for the rehabilitation of the larger existing tailings dams. 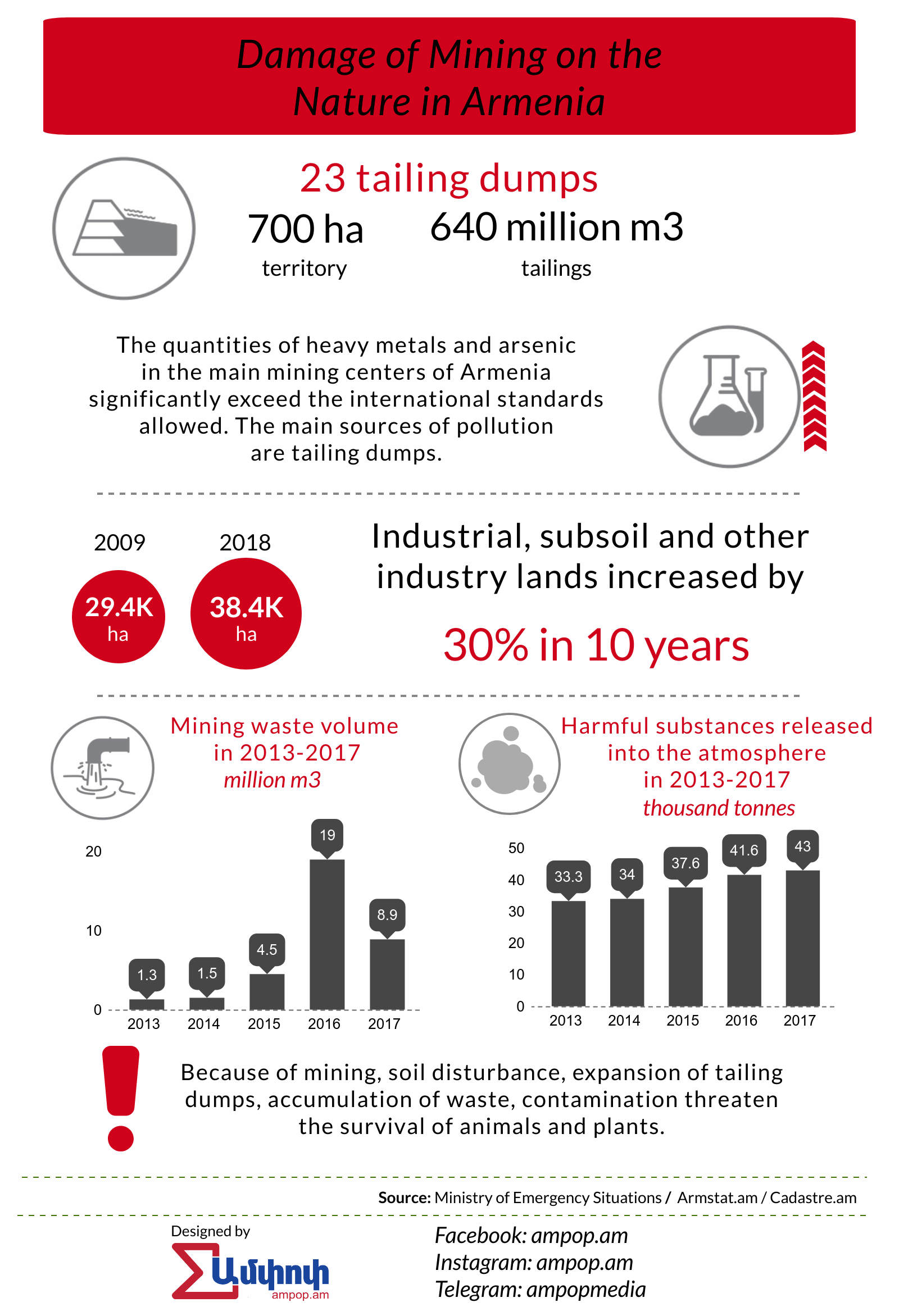 However, the first task of the responsible mining is waste management. The mining industry is the largest producer of waste in the world – 70 billion tonnes per year. At the same time, waste management, that is, mine restoration activities are very expensive. Mining operators try to avoid the existing state regulations in this field to save money. From this point of view, the legislative field in Armenia sets very general norms.
Mining waste management is also a global issue.

International experience is mainly guided by the principle of “polluter pays” which states that those who produce pollution should bear the costs of deterring, avoiding or reducing them.

However, this was not a justified practice in a sense that companies avoided environmental charges, and the disposal or even the re-exploitation of their waste was the state’s duty. “Polluter pays” principle exists in Armenia now, which means that the mining operators are responsible for the damage caused by their actions. 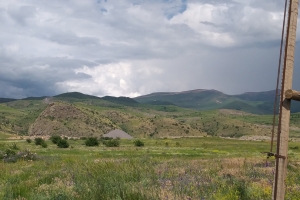 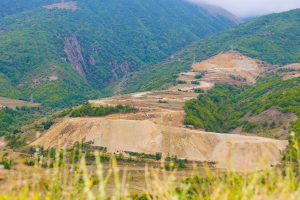 Lichk Mine 300 metres far from residence 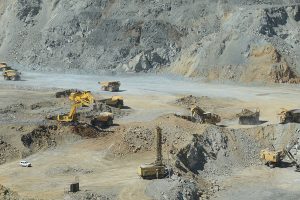 How transparent is mining in Armenia?