With the decision of Prime Minister (PM) Nikol Pashinyan Zareh Sinanyan has been appointed High Commissioner for Diaspora Affairs. It is a new post created as a result of Government structural amendments.

The Office of High Commissioner for Diaspora Affairs will replace the former Ministry of Diaspora and will be included within the RA PM’s Office.

Before moving to Armenia, Zareh Sinanyan had been living in the USA and was one of the five members of Glendale City Hall. Anyhow, he had expressed his readiness to resign from his post and move to Armenia to take up a high-ranking position in the Government.

LSG Elections in 23 Communities of Armenia

On June 9 regular and snap local self-government (LSG) elections were held in 23 communities of Armenia.

Only one candidate out of 3 ones of the ruling “Civil Contract” party succeeded in the elections getting the sufficient votes.

One of the most disputable and most debated results of these elections was election of Abovyan community leader. The current mayor Vahagn Gevorgyan was re-elected winning the candidate of “Civil Contract” party Grigor Gulyan by 395 votes. It should be noted that head of “Prosperous Armenia” party, businessman Gagik Tsarukyan supported Vahagn Gevorgyan in the elections of Abovyan Community 4 years ago. This time both Gagik Tsarukyan and Vahagn Gevorgyan claim that there was no support form the party and its leader.

According to the observations of “Akanates” observation initiative, violations were registered during both the pre-election period and the electoral process. In particular, abuse of administrative resources and cases of intentional violation of the results were noted.

From June 15, “Armenia Airways” launches Yerevan-Tehran-Yerevan regular flights. Flights to this route will be made 3 times a week, on Mondays, Thursdays and Sundays, and starting from June 24, every day. Price of one-way ticket starts from 69.000 AMD.

Positive Conclusion to Tuition Fee to be compensated by Income Tax

The NA Standing Committee on Science, Education, Culture, Diaspora, Youth and Sport gave a positive conclusion to the tuition fee to be paid by Income tax. By this draft, students of Master and Postgraduate Degrees may compensate their tuition fee by Income tax. And the Government will set the threshold of average qualitative assessment, in case of which students may make use of this privilege.

Earlier, the Ministry of Finance had given a negative conclusion to this draft. And in-spite of this fact, authors of the draft think that the final decision should be made by the Parliament. The bill was presented by Lilit Makunts, head of “My Step” faction and MP Sisak Gabrielyan.

You can learn more information on the Students’ Loan Program by the study of “Ampop Media.”

Earlier, Head of SJC Gagik Harutyunyan and acting Head and member of SJC Gevorg Danielyan had resinged. On June 14, the SJC session did not take place for the first time because of absence of quorum.

Number of Fires has Increased in Armenia 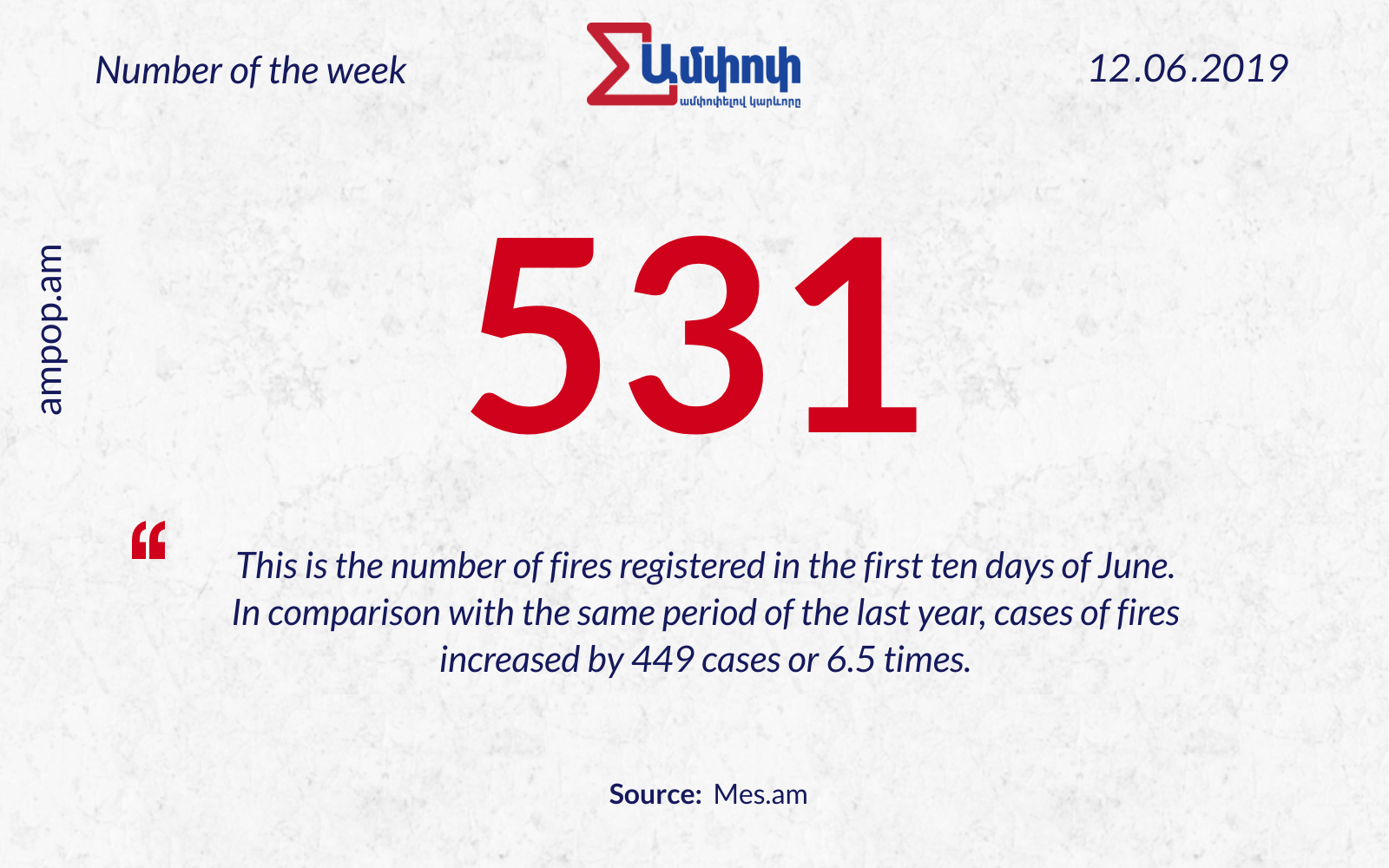 According to the head of National Crisis Management Center, r/s colonel Hovhannes Khangeldyan, some of the reasons is people’s careless attitude to the fire, not blowing down fire in open-air areas, throwing cigarettes from cars ans so on. Fires near the highways make a large percentage.

It should be noted that by grant funds of CNF (Caucasus Nature Fund) Armenia purchased four truck vehicles full of firefighting equipment. On June 14, those vehicles were handed over operators of specially protected natural areas.

June 1-7. Resignation of the Minister of Justice of Armenia
June 17-21. Crisis Situation in The Constitutional Court of Armenia