Agriculture is one of the most important branches of Armenia’s economy, where more than 35% of the population is involved in it. The agricultural sector is of vital importance for the Armenian economy. Any substantial increase in the prices of agricultural first need products causes social dissatisfaction among different layers of society.

The public’s concerns about the high prices of meat, fruit and vegetable have increased in recent months.  Reasonable arguments on the high prices of the above mentioned products may be obtained as a result of a comprehensive study of the field. For example, the export and forage production volumes, weather conditions and other factors may have an impact on meat prices in market. 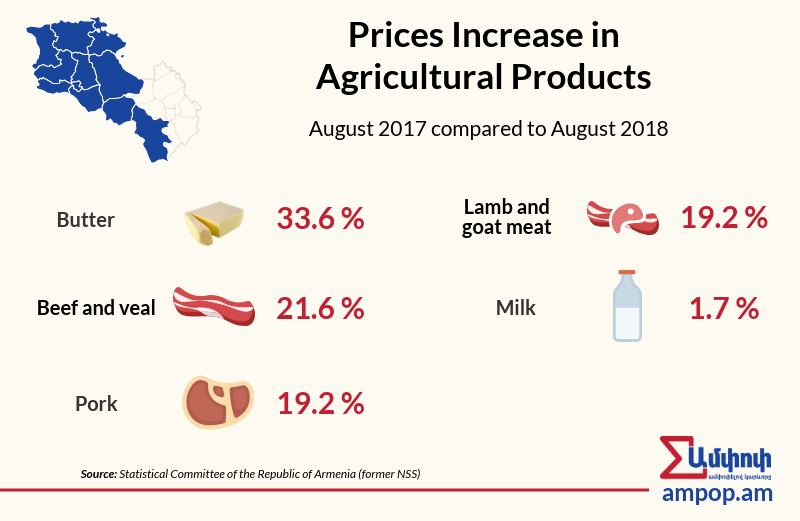 During the past 10 years the gross product of the country’s agriculture (the total amount of the goods produced per annum) increased with 44.3% reaching 906 bln AMD in 2017. In the specific gravity of GDP the share of agricultural sector dropped from almost 20% to 14.9% in 2017. This indicator cannot be considered to be a regress, as industry and service sectors develop faster than agriculture, hence the specific gravity of agriculture gradually decreases in GDP. In European countries, e.g., in France, agriculture accounts for 2% of GDP, in Germany -1%, in Greece -4% etc.

Agriculture has 2 main branches – livestock and plant growing. In addition, according to the data carried out in Armenia in 2017, the gross product of those branches are nearly equal. Plant growing sector provides products of 468 mln AMD, livestock – 438 mln AMD. 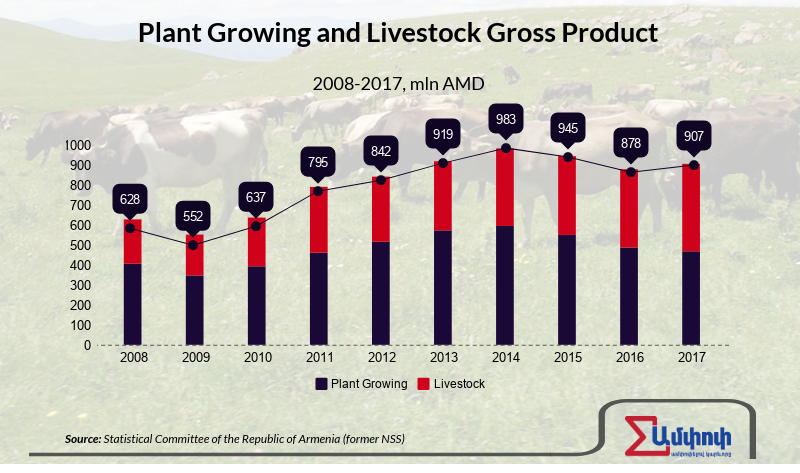 In 2017 Agriculture decreased by 3% because of sowing areas, crop capacity, bovine animals and poultry reduction. In this sense it is logical that this reduction could not but lead to the rise in prices of some products (meat, dairy products, tomatoes, etc.). Chairman of the Agrarian-Peasant Union of Armenia Hrach Berberyan considers that the increase in vegetable prices is related to the reduction of sown areas. According to him the latter is because of incomplete irrigation system and absence of export schemes. 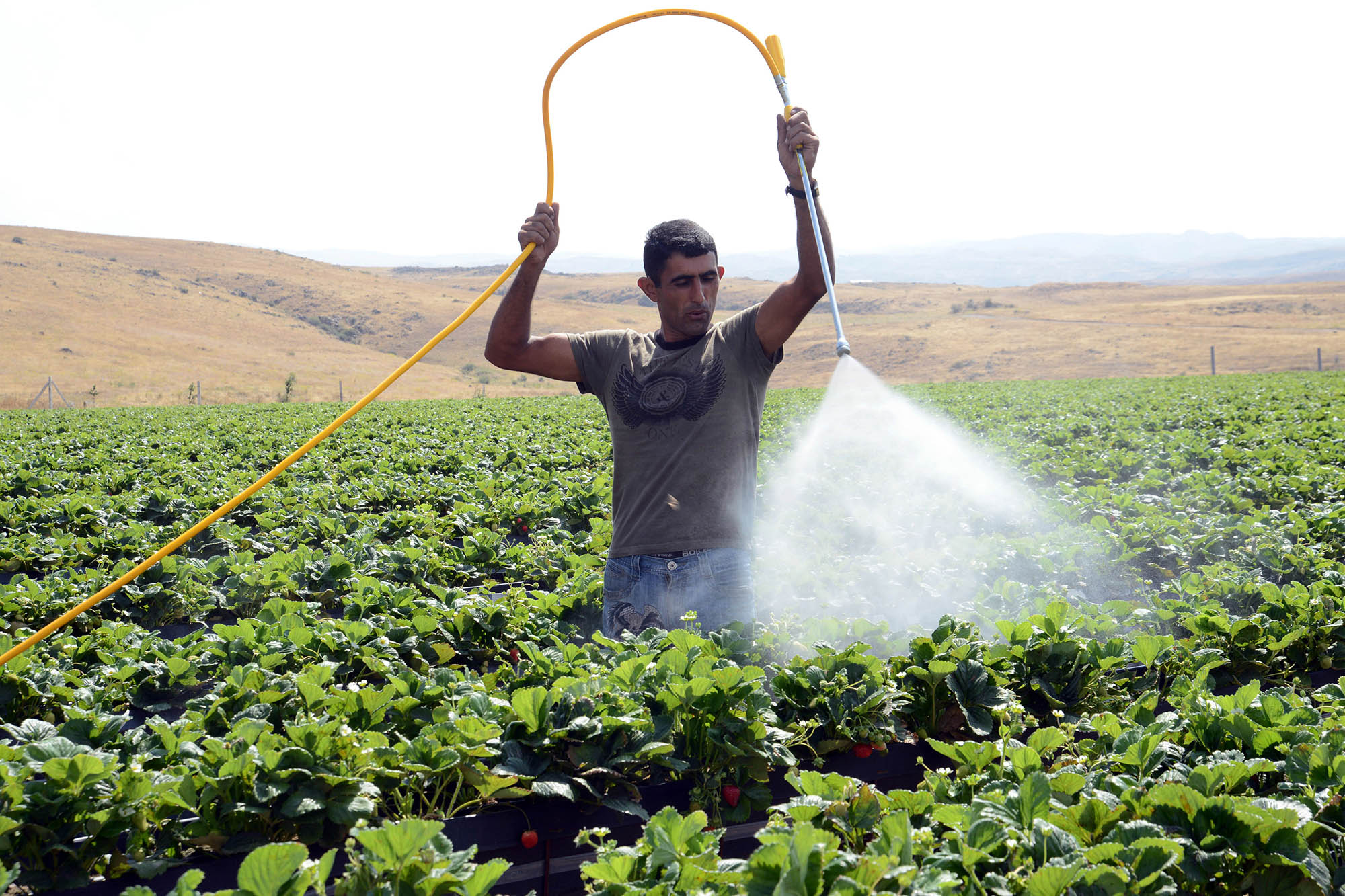 The main producers of most Armenian fruits are located in Ararat Valley, in the regions of Ararat and Armavir, where 74% of the country’s peach, 70% of apricot, 62% of cherries, 56% of plum, 48% of quince and 41% of berries gardens lie. Apple production is concentrated on Kotayk and Aragatsotn regions, Pear and cherry production – in the regions of Kotayk and Gegharkunik, nut production –  in Kotayk, Vayots Dzor, Tavush and Aragatsotn regions, Subtropical fruit production (blood orange, fig, pomegranate, cornel and mulberry) – in Tavush and Syunik regions. According to the data published by the Statistical Committee, in the period of January-July 2018, crop production increased by 14.2%.

In 2017-18, the livestock sector, in contrast with 2012-16, has tangible decrease. In 2017 it was reduced by 10% and in January-June of 2018 – by 3.7%. The Regulatory Affairs Office considers that the growth in this sector is connected with the fact that the imported cattles got adopted to the local conditions.

In 2017 the export of cattle made 1997 tons, and the value – about US$5mln. As compared to 2016, this indicator has increased nearly ten times. Meanwhile, in 2016, the export made only US$552.000. Of course, the decrease of milk storage price and forage production (because of unfavourable wheather conditions) had an impact on livestock fodder reduction. Anyhow, the key factor is the significant increase in exports. 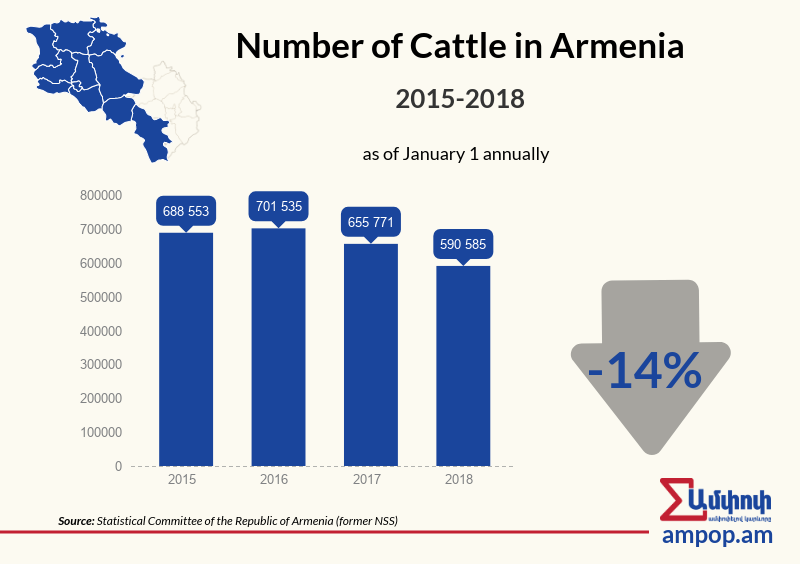 2018 budget plans to allocate 19.7 bln AMD to this sector, while 2017 budget approved 14.3 BLN AMD (in 2016- 13.4 bln AMD).  At the end of 2017 started the State Support Program ”Subsidizing Interest Rates for Agriculture” which can be considered a novelty in this sector if we take into account the low interest rates of agricultural loans. The main goal of the project is to contribute to the expansion of the capacities of businessmen, investment of modern technologies, and increase of agricultural productivity by partially subsidizing interest rates on loans which are provided to farmers in the agricultural sector. The interest rates are set at 3-5%, which can not be compared with the interest rates of previous years. In the previous years, loans were also subsidized but did not have such a large scale, and the starting point of interest rates was 8%. It should be noted that the main concerns of farmers previously were high interest loans.

In the new government’s program of RA, agriculture is stated as the second most important direction (the first one is high technology development). The program is going to focus on the development of untreated land, drip and anti-hail systems.

Only in some time we may estimate the possibility of agricultural sector development which is of vital importance by the country. The reason is first of all the fact that budget allocations to this sector were defined by the draft budget approved by the end of the last year and the current government will have the opportunity to examine this issue more thoroughly in the coming year. It should be noted that the government has already approved the 2019 draft budget and has sent it to the parliament.

The Fall of Nairit: From the Bedrock of the Country’s Economy to Decay
Energy Dependence and Endless Bargaining On Tariffs